Saturday, February 22
You are at:Home»News»Sarawak»Four years of hell 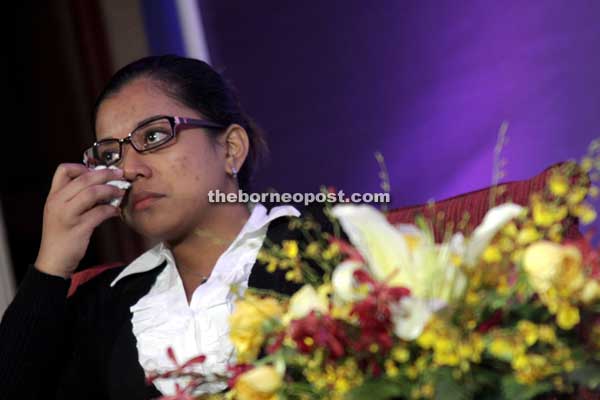 TOUCHING: Lydia in tears when recalling her experience in prison for drug possession in Trinidad and Tobago. Photo by Kong Jun Liong. 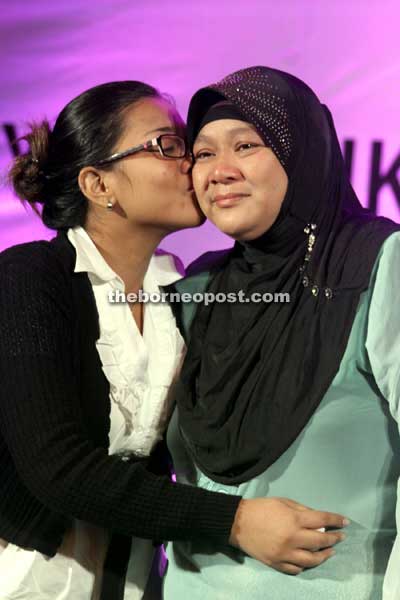 MOTHER’S LOVE: Lydia kisses her mother after the talk.

KUCHING: Former drug mule shares experience in jail and how she was lured by illegal syndicate.

A sharing by a former drug mule that she had to endure four years of hard labour at a prison in Trinidad and Tobago should serve as a timely reminder to young girls not to fall for something that is ‘too good to be true’.

At an eye opening sharing session, Wan Lydiawati Abdul Majid, who referred to herself as Lydia, struck home the message that no one is safe from falling victim to illegal drug syndicates if they are not careful.

She related how in 2007, an ‘unbelievable’ all-expenses trip around Europe and South America turned into her worst nightmare when she was found guilty of possessing 2.197 kg of cocaine at Crown Point International Airport in Trinidad and Tobago.

The Rawang girl was on the trip together with a woman called ‘Kak Siti’, who befriended her when she was studying in Kuala Lumpur.

“I’m here as a reminder to anyone out there who are even thinking of getting involved in drug trafficking to stop whatever they plan to do and be careful of the people they befriend,” she said in a sharing session during the ‘Publicity, Information and Public Information’ programme organised by Ministry of Foreign Affairs here yesterday.

“I never thought that among all people, I would be a criminal…be sentenced to prison. I thought I was invincible to these things and it was something that you only see in papers and TV,” she added.

Recalling her mistakes that landed her in prison in a foreign land, Lydia said she blamed her carelessness and stubborn attitude the most.

“I thought I was old enough to make my own decisions without telling anyone, including my mother. I was blinded by the offer to go on an all-expenses trip to Europe where I would shop and travel for free,” said Lydia, adding that during that time, she never intended to tell her single mother, Sharifah Marina Syed Hamzah, about the trip.

The supportive mother accompanied her daughter to the talk which moved her and some participants to tears.

Lydia began to sense something amiss when she noticed that during their stop in Caracas, Venezuela, ‘Kak Siti’ was always attending meetings with people while she was instructed to wait at cyber cafes.

‘Kak Siti’ then told her to fly ahead to Trinidad and Tobago and assured her that she would arrive the next day.

“I ended up waiting for weeks until I received a call from her to take care of a bag that was with me. She even told me that the bag contained drugs, which I could not believe until enforcement officers at the airport found the drugs in my luggage,” she said.

She described her time in the prison as a ‘living hell’ where she had to share a cell with two other prisoners.

“I was terrified because I was surrounded by all sorts of criminals including murderers! There I was feeling so lost and small in a foreign prison,”

Among her worst experiences, she said, was sharing a pail with her cellmates to defecate and urinate, eating bread infested with maggots and breaking fast with rotten food.

“I woke up every morning pinching myself, hoping that I would hear my mother’s voice and opened my eyes to view my own room. I really felt the pain when all I saw were steel bars,” she said.

“If I was not strong and wasn’t thinking about by mother and God, it would be so easy for me to take a blanket and hang myself. There are people who do that in prison because they can’t stand the stress and pressure of prison life,” she recalled between tears.

In her parting remark, Lydia emphasised that youngsters should never assume that they are ‘matured’ and independent enough to make decisions without telling anyone.

“Never think you are too matured or independent to tell your parents your decisions and plans, they must know what you are doing to keep you in check with life,” she advised.

Today, the 26-year-old is trying to find light in the tragedy and feels that she was put in the situation for a reason.

“I believe that I was there for a reason. That’s why I’m putting that experience into positive use to help others realise the dangers lurking around us that we never saw coming.

“My heart aches whenever I read in papers of young ladies getting caught in countries such as China where a firing squad awaits them if found guilty for drug trafficking. I was in fact lucky to be caught in Trinidad and Tobago because I can still be here to share my story,” she said.