Tuesday, May 17
You are at:Home»Business»Najib unveils 27 EPPs in Iskandar Malaysia 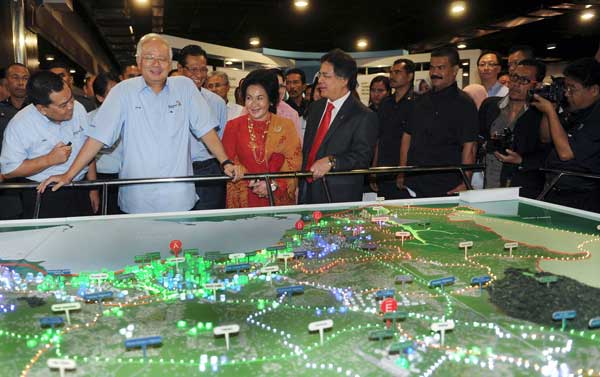 FURTHER DEVELOPMENTS: Najib (Second left) with other distinguished guests looks on at the development map of Iskandar Malaysia during the launch of the programme and Iskandar Malaysia City at Persada Johor. — Bernama photo

The projects were expected to woo RM139.3 billion in cumulative domestic and foreign investments, he said.

To be implemented between this year and 2020, the projects would generate RM25.57 billion to the Gross National Income (GNI), said Najib, who is also Finance Minister.

Najib said the programme was ‘hatched’ by the City and Corridor Laboratory between September and November last year under the supervision of the Performance Management and Delivery Unit (Pemandu) in the Prime Minister’s Department.

The Prime Minister said the 27 EPPs in Iskandar Malaysia entailed three economic sectors – tourism, education and oil and gas, with the targeted GNI of RM25.3 billion until 2020.

He said eight of the EPPs were in the education sector as part of efforts to enhance schools, private and international tertiary learning institutions’ participation.

The move would also transform Iskandar Malaysia into an excellence centre for innovations and research and development, he said.

Najib said 13 of the EPPs were planned for the tourism sector, particularly to ensure tourists’ movements into Iskandar Malaysia were not hampered by traffic congestion and lack of infrastructures.

“One project to be implemented immediately is the road upgrading to ensure smooth entry to Iskandar Malaysia for all modes of transport,” he said, adding that more hotels would also be built to accommodate tourists.

Najib said the government would also create unique tourism attractions and world-class theme parks besides entertainment in the form of shopping complexes and sports events.

The Prime Minister said six EPPs would be implemented at the state-level oil and gas sector until 2020.

He said the projects would not be confined to Iskandar Malaysia only but would also include Pengerang in south-east Johor.

The prime minister said the City and Corridor Laboratory had identified three areas that needed immediate action to improve the quality of life in Iskandar Malaysia.

Najib said the quality living projects need RM24.5 million for implementation, with RM14.2 billion or 58 per cent borne by public funds, while the balance RM10.3 billion or 42 per cent by the private sector.

For the city rejuvenation project, Najib said the laboratory had listed 11 projects to infuse ‘new breath’ and upgrade Johor Baharu City’s landscape to provide a fresh charm and regain its past glory.

The prime minister said he believed the Iskandar Malaysia City and Corridor Transformation Programme would drastically change the landscape of Johor Baharu, Pengerang and Mersing.

“I dare to say here the transformation agenda being implemented by the government was far better than from reformation,” he added. — Bernama