Friday, June 25
You are at:Home»Features»Insurgency ended with Sri Aman Accord 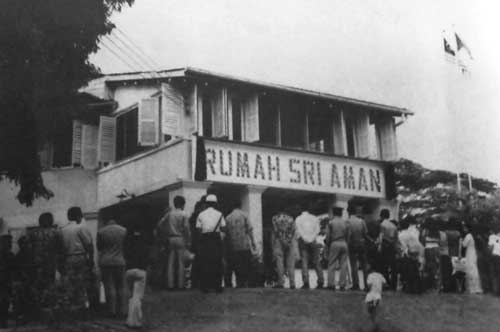 RUMAH SRI AMAN: This is the bangalow where the Memorandum of Understanding was signed on Oct 21, 1973.

ON September 30, 1965 a premature leftist military coup in Indonesia failed.

Suharto very quickly seized control of the armed forces and in a few months brought about the downfall of the Soekarno government, and had himself installed as president.

Suharto initially supported them, according to Bong Kee Chok but with the signing of a peace accord with Malaysia on August 11, 1966 that support effectively ended.

In 1970, the Sarawak United Peoples’ Party (SUPP) joined the Sarawak state government, becoming a partner of the ruling Alliance Party, and effectively turning their backs on Bong and his compatriots.

Bong and his colleagues continued their struggle with the setting up of new armed groups under different names and deploying them throughout Sarawak. Their activities seemed to have intensified with engagements involving both the Malaysian and Indonesian armed forces.

In September 1971, they formed the NKCP (North Kalimantan Communist Party), giving their struggle a formal political platform. It formally became a communist movement, even though in actual fact, it had been one since the beginning of their armed insurgence, at one time calling themselves The Sarawak Liberation League.

NKCP’s formation was celebrated in the jungle. It was supposed to give it a wider appeal internationally and help it gain support from other communist states. That was why Wen Min Chuyen, NKCP’s top leader, soon embarked on a trip to China to enlist foreign support. He eventually stayed back in China and directed NKCP’s activities from there.

The Sarawak state government, meanwhile, also stepped up their operations against them.

1970: Operasi Jala Raya, or Big Net Operation was carried out in the Nonok Area.

1971: Operasi Ngayau was launched in the Third Division.

1972: RASCOM, the Rajang Area Security Command, was set up, also in the Third Division.

Faced with increasing pressure from both the Malaysian and Indonesian armed forces, Bong and some of his colleagues felt the need to have a unified, coordinated fighting force to withstand this onslaught.

Bong left his command post in the Third Division and trekked for days in the jungle to meet his counterparts in the First Division to work out a plan to forge a unified North Kalimantan Liberation Army. The plan did not materialise. That caused Bong to rethink the prospect of their armed struggle.

When I asked him what caused him to leave his armed struggle and come out of the jungle, he said the failure to forge a bigger, unified fighting force meant the struggle would not succeed in the short or medium term.

“It would take a very long time to realise our dreams. We did not have the numbers and it was so easy for the Malaysian government to recruit a new soldier. For us it was very tough trying to attract someone to join us,” he said.

Q: Were you disillusioned? Or lost your fighting spirit?

A: No. Just that it would take a much longer time. The fight goes on, perhaps not in the form of an armed struggle but through other legitimate political vehicles.”

A: I was on my way back from the First Division after my failed unification talk with Lam Wah Kwai, the political commissar of Sarawak Peoples’ Guerillas. In Simanggang, I stopped and decided it  was time to end the armed struggle. It was my personal decision at that point. I contacted two of my close associates, my younger brother Bong Kee Kuan, and Tiong Ho Hung, gave them each a letter addressed to Datuk Abdul Rahman Ya’kub, the then Chief Minister, and asked them to come out of the jungle to make contact through our people in the First and Third Divisions. I told them if they were detected and apprehended, they would ask to see the Chief Minister.”

Q: Were they detected?

Rahman Ya’kub was in the hospital at that time. Upon hearing this he immediately left the hospital and arranged to have them flown by helicopter to Kuching. That very evening he met them. They told me he was very pleased to meet them.”

Q: What did you say in the letter?

A: It was written in Chinese. In the letter, I offered to meet the Chief Minister to have discussions ‘for realisation of peace in this state and a cessation of war and to carry out reconstruction and development.

Following negotiations between Rahman Ya’kub and Bong, a Memorandum of Understanding between the two was signed on October 20, 1973, at the Rumah Kerajaan, Simanggang (renamed Rumah Sri Aman thereafter.) Bong signed as Director and Political Commissar of PARAKU; Rahman signed as Ketua Menteri and Director of Operations, Sarawak.

In January 1974, four top NKCP members, including Bong and Ang Chu Ting, signed a gentlemen’s agreement with the State government, securing full citizenship and legal rights of all ex-guerillas, and release of political prisoners, the right to participate in the management of the Sarawak coalition government, among other things. 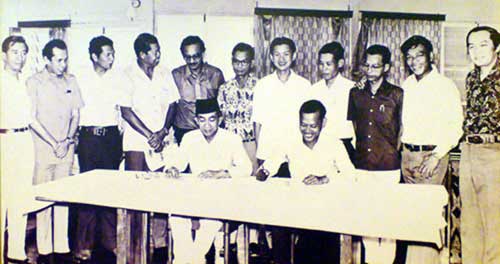 The Memorandum of Understanding was announced by the state government on March 4, 1974. By July of that year, 570 members of PARAKU/NKCP came out of the jungle. Fifty two, including Ang Chu Ting and Wong Lieng Kui, returned to the jungle to continue with their armed struggle.

This memorandum of understanding resulting in the laying down of arms and returning to society of Bong and his fellow guerillas eventually led to a final peace agreement in 1990, ushering in an era of peace and stability.

Bong and Rahman Yaakub will be remembered for their initiative, foresight, courage and leadership in this dramatic event. If anything, the renaming of Simanggang, where the memorandum of understanding was signed, to Bandar Sri Aman (Town of Peace) would bear testimony to their contribution.

Q: Did you receive anything from the State government for coming out?

Q: No land or money? What about the pig farm that you started soon after?

A: That was my family property. My father was still alive and he helped me start up the farm.

Q: How do you find Datuk Abdul Rahman Ya’kub?

Q: I read in a newspaper report quoting Datuk (now Tun) Rahman Yaakub that you kept up with him, visiting him during Hari Raya every year except the last two years?”

Q: Any regrets with giving up more than 10 years of the prime of your life in a struggle that didn’t succeed?

A: No regrets at all (laughter).

Q: Finally, Bong, how do you think people would judge you?

A: It is not for me to say. History will be the best judge.

Q: Oh! One more thing. I noticed you lost a finger in your right hand and the others were also partly cut or deformed. May I know if you injured it during combat?”

A: No. During an engagement with the Indonesian forces, I discovered the hand grenades we obtained from the Indons did not explode. Because of that, we lost two comrades. After that, I was determined to rectify the hand grenades. After modifying them, I tested them. One of them just exploded too fast and blew up as it was leaving my hand. I was trained in making explosives but was a bit careless. I think I used a fuse that was too big.

Q: One last question. Do you regard yourself a nationalist or a fanatic?

“I am not a fanatic. Nationalist yes!”

I left Bong Kee Chok’s residence, reflecting deeply about what he had done and how history should judge him. Was he a nationalist hero who risked his life and gave up a good part of his life fighting for “true independence” of the country he loved?  Or was he a revolutionary or communist fanatic who risked his and others’ lives to fulfill a personal ambition of creating and leading an independent state?

The truth is history can be unkind to some and generous to others, depending on which side you are on and the circumstances of the time. If I were a student in the post-Japanese era in a similar school as Bong, there was every likelihood I would have taken the same path as Bong.

It would have been the honourable, proud and nationalistic thing to do. And if that group of students had succeeded in their struggle, they would have become national heroes.

And on the other hand, if Bong had been born at a different time, much later, say, and had gone to English schools and overseas, what would have he become? He could be a specialist medical officer in government service.

• The author wishes to thank Bong Kee Chok for agreeing to be interviewed and sharing his personal views and experience. He has read this article and agreed to its publication.