Thursday, October 1
You are at:Home»News»Sarawak»Resettlement area to be turned into RGC 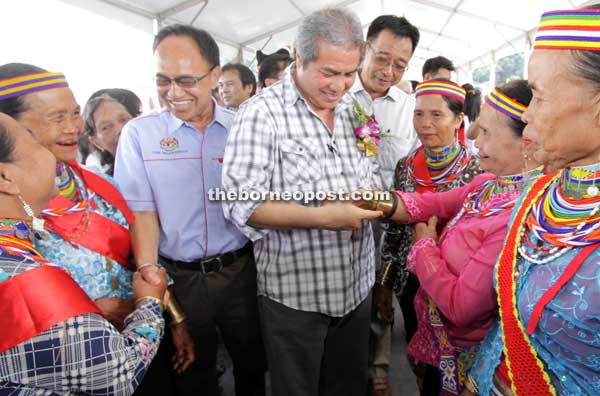 UNIQUE CULTURE: Awang Tengah admires the copper rings used by the women of Kampung Semban who lined up to welcome guests. He is flanked (on the left) by Dawos and Abdul Karim. The women wore the rings from the tender age of six.

Second Minister of Resource Planning and Environment Datuk Amar Awang Tengah Ali Hassan said schools, clinic and shop lots would be built in the area together with government offices.

Describing the area near the city as attractive with its flora and fauna, Awang Tengah said the facilities would provide the opportunity to the people to intensify their economic activities.

“We (the government) want this area (Bengoh Dam resettlement area) to have a critical mass because it is always the desire and intention of the government to look after the welfare of the people.

“In general, we want to turn the area into a development centre for the benefit of the people,” Awang Tengah said at the earth-breaking ceremony for Bengoh Dam resettlement area along Jalan Semadang-Skio, about 40 km from here yesterday. The earth-breaking ceremony was for the construction of 204 units of Rumah Mesra Rakyat (RMR) to resettle four villages – Kpg Taba Sait, Pa’in Bojong, Rejoi and Semban – affected by the RM310 million Bengoh Dam project.

Naim Engineering Sdn Bhd was awarded the contract to build the houses with more than RM19 million allocation from the state government, and expected for completion by end of this year.

According to Awang Tengah, the government was spending more than RM200 million for the resettlement exercise to enable construction of the dam to meet the demand for water supply in Kuching, Serian and Samarahan.

The Minister of Public Utilities and Industrial Development thanked the villages for their sacrifice in moving from the area to enable the dam project.

“I acknowledge that it is very difficult to move, particularly when you have stayed in your villages for ages but you  decided to move, and for that I salute you,” he said.

He took a swipe at the opposition for instigating the people affected by the Bengoh Dam project.Awang Tengah said the construction of Bengoh Dam was crucial to meet the increasing demand for water in Kuching, Serian and Samarahan – both for domestic and industrial use.

“Without the dam, we will be facing acute shortage of clean water supply, and that will cause the people to suffer and impede the progress of the state,” he asserted.