Monday, February 24
You are at:Home»News»Sarawak»KKIA to operate round-the-clock by May 1 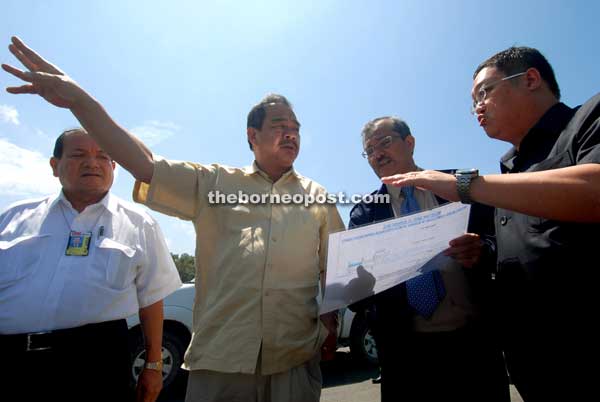 SET FOR COMPLETION: Kong (left) being briefed on the progress of the KKIA runway upgrading works.

KOTA KINABALU: The Kota Kinabalu International Airport will be operational round the clock by May 1 though work on the runway resurfacing is only expected to be completed by year end.

Transport Minister Datuk Seri Kong Cho Ha said the round-the-clock opening of the airport would allow more flights to land and take off, even during odd hours.

Since 2006, the airport has to close for six hours daily (from midnight) to enable the upgrading works to be carried out.

“Opening of the runway is important, and it would make many people happy such as the airlines, the state government and the tour operators.

“I received assurance from the contractors that they would work hard to meet the deadline,” Kong said after inspecting the progress of work at the airport yesterday.

Work on the taxiway, he said, would be completed by end of next month.

“But there are still other works to be done, including the extension of the runway by 792 metres to 3,780 metres.”

He also said the runway had to be raised to comply with the requirements of the International Civil Aviation Organisation.

“Apart from this, some aircraft approach lights need to be installed in the sea beyond the southern part of the runway.

When fully completed, the 3,780-metre runway would allow a fully laden Boeing 747 to land and take off.

“At the moment, the Boeing 747 can still land and take off but on a restricted basis, such as not carrying so many passengers and fuel to allow shorter take off and landing,” he said.

Kong assured that the scheduled flights would not be affected by extensions works on the runway – to be completed by year end.

The runway extension is part of the massive RM1.4 billion expansion and refurbishment works on the airport that included the construction of a new main terminal, a low cost carrier terminal and a new control tower.