Tuesday, January 21
You are at:Home»News»Sarawak»Masing insists his ‘Tauke’ is right 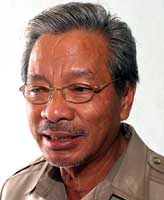 KUCHING: Parti Rakyat Sarawak (PRS) president Tan Sri Dr James Masing has insisted that he is right in stating that elected representatives and the government are the bosses.

In response to various comments made after his recent ‘Jangan Lawan Tauke’ remark, he said there appeared to be some confusion on the basic principles of parliamentary democracy with some people entering the fray by becoming overnight experts on the issue.

As such, he pointed out it was timely for him to respond by referencing a few books including ‘Introduction to Political Science’ (3rd Edition) by Moten and Islam and Political Thought by CL Wayper to put the picture in its proper perspective.

According to Masing, there are three branches of government which practises parliamentary democracy. The Judiciary is to interpret the law, the Legislature is to make laws which the judiciary, in case of dispute, will interpret while the Executive is to execute what the legislature has made into laws.

“The confusion, it appears, is on the role of the legislature – which is the elected representatives or YBs. All YBs are elected by the people/ voters. During the polling day, the ‘rakyat’ (people) who have been registered as voters are the boss. The power is invested on the ‘rakyat’, by the legislature, to elect who should be the administrator/ boss of their lives for the next five years.

“Once they have elected their YBs or the administrators, the role changes. The elected representatives become the administrators/ boss of the ‘rakyat’, while the ‘rakyat’ plays a subservient role and will seek assistance from the YBs from time to time,” he said at the closing of PRS Youth Seminar at a hotel here late yesterday evening.

Masing, also Minister of Land Development, stated that while the YBs make laws which the ‘rakyat’ must obey, they make the decisions based on their discretion and to the best of their own abilities.

“If their YBs, for instance, pass a law which tells the ‘rakyat’ to walk backward, the ‘rakyat’ must walk backward…. Within the period of five years, the elected representatives have the freedom to decide what is best for the ‘rakyat’. If one or two people feel being neglected by their administrators/ YBs, they have to wait for five years to change their elected representatives. That is why some thinkers of the past described democracy as the ‘tyranny of the majority’,” he said.

He also mentioned that the opposition being the minority would cry foul to almost anything the elected majority does. He claimed the opposition make a lot of noises, create troubles and make fusses in order to be heard by the majority.

“What does the majority do in reply? Sometimes, they do not respond and they keep quiet. Why? Because they respect the minority’s right to be heard, no matter how irritating this small group has become. Not only do they respect their right to speak and make noises, the majority allows allowances and perks to be given to them for making nuisance of themselves against the elected majority,” he said.

Masing reportedly uttered the ‘Jangan Lawan Tauke’ (don’t fight the boss) remark when defending the party’s Youth chief Datuk Mong Dagang, who the opposition had accused of taking away the welfare assistance and subsidies of one physically challenged farmer Frusis Lebi from Sri Aman.

Mong, also Assistant Agriculture Minister, had instructed a government agency to stop giving aid to Frusis because he had supported the opposition and even in the last state election.

Previous ArticleChildren at high risk of adding ‘cybercriminals’ to friends’ list
Next Article Give young leaders a chance, says Fadillah