Saturday, December 3
You are at:Home»News»Sarawak»Foreign tourist taken for a ride 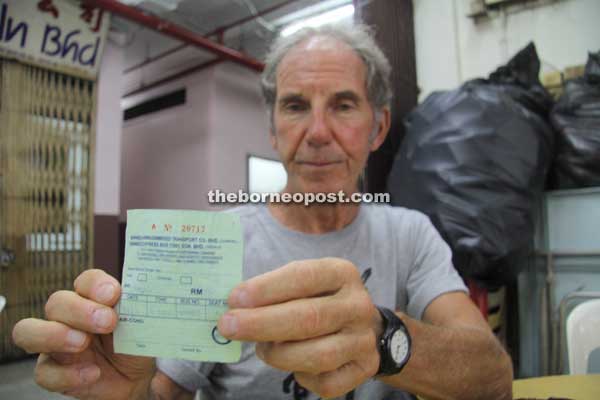 BAD EXPERIENCE: Retired cop and avid traveller Joseph Richardson showing the ticket for the 6am express bus which he had boarded.

But the problem did not lie with him. This well-travelled retired cop, who has travelled all over South East Asia and thrice in Malaysia, was taken for a ride by a mischievous bus driver and his colleague.

Joseph Richardson, 67, said when the bus reached the Niah road junction, he promptly asked the bus driver how far the distance was to the Niah Caves, but was told to stay on the bus as Niah was still some distance away.

The bewildered tourist claimed that he asked the bus driver at least five times along the way, and each time the response was the same – we still have about half an hour to go before reaching Niah.

A local passenger who had been observing the whole episode finally snapped and ticked off the bus driver and his colleague for their unacceptable behaviours.

But by then Richardson was already 100 km away from the Niah road junction. In fact, he was about 30 minutes away from Bintulu!

After being ticked off, the driver owned up and shoved RM10 to Richardson as a ‘refund’.

Luckily when he alighted from the bus it was only 9.30am, and there were no connecting flights in his itinerary.

Richardson later boarded a Miri-bound bus and the bus ticket was RM15, RM5 more than his refund money. Upon reaching the Niah road junction, he took a car to Niah National Park, and thoroughly enjoyed his visit there.

“I asked the driver at least five times, but each time he said it was half an hour away to Niah, when in fact we were already way past the junction and already heading to Bintulu.

“Probably, they were thinking that it is okay to play around a foreigner. I don’t think it was language problem as they understood me. This is not good business,” he told The Borneo Post, with the hope that the relevant authorities would address this issue. While touring Niah Caves, he bumped into a sympathetic officer who later sent him to the Niah road junction to catch a bus to Miri bus terminal.

When he reached the bus terminal, Richardson took pictures of the schedule of the offending bus driver and kept his ticket as evidence.

“It is fortunate that I did not have any connecting flights to catch. Such a situation would have been disastrous for tourists rushing for their flights.”

Before coming to Miri, he flew from Singapore to Kuching and had visited several places there, including Semenggok and Bako National Park. He then flew to Mulu National Park.

After visiting Mulu Caves, he flew to Sabah to climb Mount Kinabalu and visited many places of interest, including Sandakan. Richardson said he had a fascinating experience with the Proboscis monkeys, and had a whale of time diving.

He added that information near a public bench in Miri had piqued his interest about Niah Caves, and that was when he decided to make a trip there. Richardson said he had fallen in love with Kuching, and would be flying back there next week for a week’s stay.

He said he would definitely revisit the Sarawak Cultural Village (SCV) for an encore of his unforgettable experience there.

“I have been to Bali, Laos, Cambodia, Thailand, Philippines, Vietnam, and many other places, but the performances at Sarawak Cultural Village is the best; totally hilarious. In fact, I so thoroughly enjoyed the performances that I had tears in my eyes. The performers there (SCV) have so much creativity, passion and sense of humour that it simply floored the audience.”