Sunday, November 28
You are at:Home»News»Sarawak»PRS’ cyber-troopers ready for coming polls 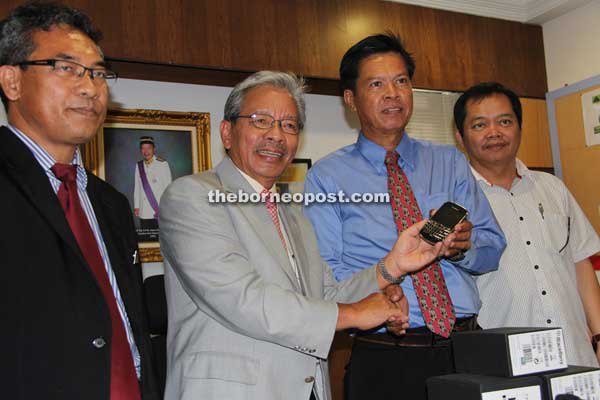 KUCHING: PRS is banking on its cyber-troopers to help the party defend its six parliamentary seats in the coming 13th general election.

Party president Tan Sri Dr James Masing said the state BN was determined not to repeat the mistake of underestimating the impact of social media in shaping public opinion.

Masing acknowledged that during the 12th general election in 2008, BN was “caught with our pants down” in terms of cyber-warfare.

“For the next two to three months before the election, Unit Media Baru (UMB) will grow in importance,” Masing told reporters yesterday during a ceremony to hand over five Blackberry phones to Majang Renggi, chairman of PRS’s UMB.

Masing, who is also Land Development Minister, noted the social media was growing more and more important by the day when compared to mainstream media in terms of readership.

Because of this, he said the party realised that shaping the people’s minds lie in cyberspace.

“I trust that my boys are very, very capable. Some of them have been trained by Malaysia’s best bloggers.”

Masing said social media had played a significantly role in BN losing five states and its two-thirds majority in Parliament during the 2008 polls.

On UMB, he said it had been entrusted with the task of countering allegations and slanderous statements against BN in cyberspace and to give the general public the true picture of what was happening in the country.

Masing expressed his regret that certain aspiring leaders have resorted to spreading lies, baseless allegations and slanderous statements online to achieve their own agenda.

“I am very confident that the majority of Malaysians will be able to differentiate between lies and truth.

“I believe that’s why in the next election, BN will still lead Malaysia because we tell what is actually happening.

“I tell my boys to never deviate from the truth. Give Malaysians the true picture of what is going on.

“This government is not a populist government. We are a responsible government, and we will implement what we have promised as in our manifesto which we put forward during the last election.”

Meanwhile, Majang said UMB was formed just before the last state election together with the other state BN component parties, namely PBB, SPDP and SUPP.

PRS’s UMB is a five-member team comprising party members, some of whom are working professionals.

Majang revealed that the members were selected based on their interests and wide ranging knowledge about political issues and happenings in the state. They underwent training in Kuala Lumpur together with other UMBs from other component parties prior to last year’s state election.

He said since the unit was a voluntary grouping, the cost for training and equipment was born by the members themselves.

When asked about the unit’s strategy to engage with the public online, Majang replied that they would work closely with the other component parties to carry out activities.

Among programmes being planned is a convention, which may be held sometime next month.

Previous ArticlePlan aims to boost academic performance of rural schools
Next Article A century on, still no burial ground – Association