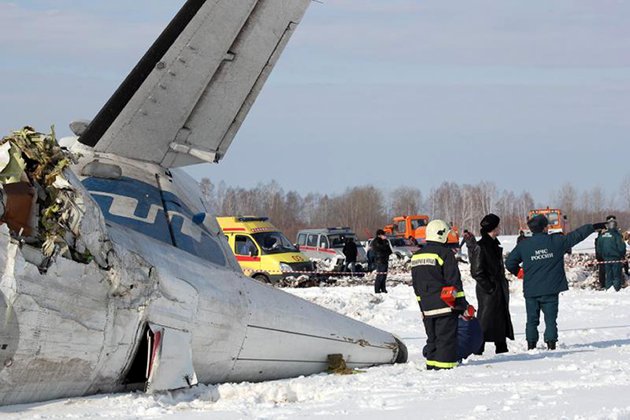 A photo provided on April 2, 2012 by the Russian Emergencies Ministry shows rescuers and investigators working at the site of a plane crash which killed 31 people on Monday. The French-Italian made ATR-72 passenger plane run by private Russian airline UTair came down moments after takeoff some 45 km (28 miles) from the western Siberian city of Tyumen. --AFP Photo

The emergencies ministry said the French-Italian made ATR-72 liner was carrying 39 passengers and four crew when it came down 45 kilometres (28 miles) from the western Siberian city of Tyumen, just minutes after take-off for the oil town of Surgut.

“Twelve people are in critical condition… Thirty-one have been killed,” the Tyumen emergencies ministry said in an updated statement after initially putting the death toll at 32.

The twin-engine turboprop was operated by UTair — a private Russian airline that conducts most of its flights in the energy-rich regions of Western Siberia and the Ural Mountains.

The airline said in a statement that the plane came down “while conducting a forced landing 1.5 kilometres (about one mile)” outside Roshchino airport.

An airport security officer told Interfax the plane had only managed to climb to about 100 metres (yards) before it lost all communication with air traffic controllers.

“The liner’s technical problems probably emerged during takeoff and the crew tried to perform an emergency landing,” the news agency quoted an airport official as saying.

One witness said he noticed a problem as soon as the plane left the runway.

“There was a small flash of light followed by smoke,” a witness identified only as Alexei told RIA Novosti news agency.

“The plane started turning, the smoke kept pouring out, and then the plane went into the field,” the witness said.

UTair itself gave no immediate reason for the crash.

Rescue teams found the plane’s cabin ablaze and the jet itself broken up into multiple charred pieces.

State television footage showed the tail lying in a snow-covered field some distance from other charred debris under a clear blue sky.

The Russian emergencies ministry said rescuers had discovered the so-called “black box” flight recorders and were sending them to Moscow for study.

The city of Tyumen lies 1,700 kilometres (1,000 miles) east of Moscow and is the capital of one of Russia’s biggest oil producing regions of the same name.

The plane was flying to Surgut — the heart of the Surgutneftegaz energy company and one of Russia’s largest oil and natural gas producers.

Interfax said one of the oil company’s board members and several of its employees were on board the flight. The firm did not release their identities or say if an had survived.

President-elect Vladimir Putin has already ordered Russia’s older planes to be taken out of service by the end of the year and for pilots and smaller air carriers to be subject to strict tests and regulations.

The crash marks the first disaster Putin will have to deal with following his March 4 re-election and underscores the difficulties Russia has faced in updating its Soviet-era infrastructure.

Officials have identified poor pilot training and lax safety rules as one of the most immediate problems affecting Russian aviation.

But plans to eliminate smaller carriers that employ just a handful of planes as a safety precaution have run up against the reality that Russia lacks the fleet needed to span the country’s vast distances.

Officials promised to recall the licences of 30 smaller airlines in response to a September 2011 plane crash that claimed the lives of 44 people — most of them members of the championship-winning ice hockey team Lokomotiv Yaroslavl.

A plane carrying Polish president Lech Kaczynski and other top officials came down in fog near the Russian city of Smolensk in April 2010 in an accident that killed 96 people and damaged ties between Moscow and Warsaw. –AFP