Saturday, October 31
You are at:Home»World»Hotel explosion is car bomb attack 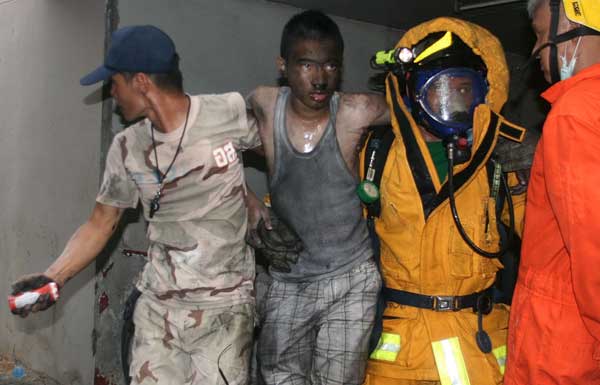 YALA, Thailand: A series of car bombs killed 14 people and injured more than 500 in the deadliest attacks to hit the insurgency-torn far south of Thailand in recent years, officials said yesterday.

In an apparent escalation of their tactics, suspected militants Saturday attacked a hotel in Hat Yai, the largest city in southern Thailand and a popular destination for tourists from neighbouring Malaysia and Singapore.

A car bomb in the basement triggered a fire which spread to a shopping mall within the Lee Gardens Plaza Hotel and killed three people, including a Malaysian tourist, according to the police.

Until now Hat Yai and Songkhla province have been relatively untouched by the shadowy insurgency that has claimed thousands of lives in the neighbouring Muslim-dominated provinces of Yala, Pattani and Narathiwat since 2004.

“There is no hint why they did this at this time,” Hat Yai police chief Colonel Khomgrit Srisong told AFP by telephone.

“We’re questioning witnesses and the injured for more information.” 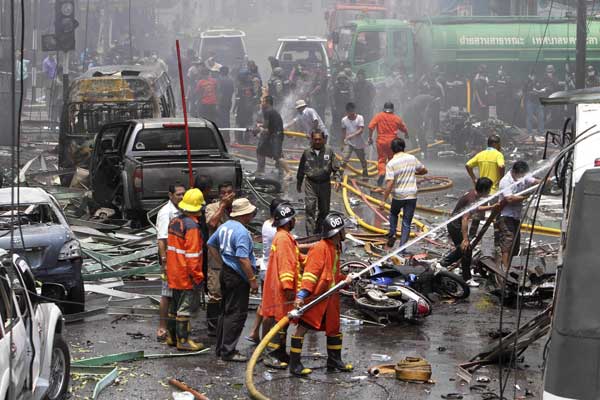 ‘WAR-ZONE’: Thai rescue workers extinguish a fire at the site of a bomb blast in Yala province. — Reuters photo

The hotel bombing came about an hour after two car bombs minutes apart hit the town of Yala around midday as people were out shopping.

“Right now we know in Yala there are 11 people dead,” a PR officer at the health ministry told AFP.

“It was a car bomb and it’s related to the incident in Yala and I believe that it was the work of the same group,” he said in televised remarks.

“In the south, there are not many insurgent groups who operate like this,” he said on TNN24 television.

Prime Minister Yingluck Shinawatra said the security forces knew which group was responsible but she would not say in order to let them do their job.

A complex insurgency, without clearly stated aims, has plagued Thailand’s far south near the border with Malaysia since 2004, claiming thousands of lives, both Buddhist and Muslim, with        near-daily bomb or gun attacks.

The insurgents are not thought to be part of a global jihad movement but are instead rebelling against a long history of perceived discrimination against ethnic-Malay Muslims by successive Thai governments.

Struggling to quell the unrest, authorities have imposed emergency rule in the region, which rights campaigners say effectively gives the army legal immunity.

Sunai said such violent militants were a tiny minority among Muslims in the south “but they are ruthless, brutal, use violence and terror.”

“The only way for the Thai authorities and Thai society to fight against these radical elements in the insurgent group is to make sure there are no conditions for them to justify their attacks,” he told AFP, adding that the authorities must hold officials accountable for abuses in the south. – AFP