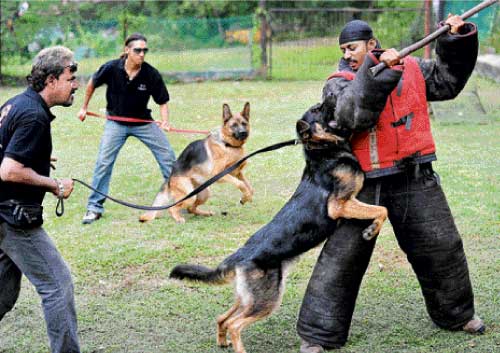 KUALA LUMPUR: A dog trainer who has considerable working and training experience in the United States and Europe believes that law enforcement agencies in Malaysia can enhance their success rate against drug traffickers by using specially-trained sniffer dogs.

Anthony Stephen, owner of Stephen K-9 Academy in Cheras, told Bernama that the use of special X-ray machines would help but due to the ingenious ways that drug mules stash away their drugs, sniffer dogs well-trained in detection could be a great source of help.

In 2011, the Royal Malaysian Customs Department seized illicit drugs worth more than RM183 million, four times the amount seized in 2010. Similarly, the police have also scored much success in their war against drug traffickers over the last few months.

Stephen said many enforcement agencies could enhance the full potential of their patrol and sniffer dogs if they are properly trained and maintained with dedicated dog handlers.

“Because service dogs always perform at their best only with handlers who have good rapport with them,” he added.

Stephen, who was working with a delivery section of a government agency before leaving for the United States in 1983 for a course as a dog handler, later worked with several enforcement agencies in Saudi Arabia on dog
handling.

He also became a trouble shooter for them on detection dogs which sometimes lose their sense of smell of the things they are supposed to look for.

“This happens when they are given too much work at a stretch. They have to be re-trained so that their sense of smell for particular items are regained,” he explained.

After his stint in Saudi Arabia, Stephen decided to go for additional training and work experience in the United States on sniffer dogs, guard dogs, police patrol dogs and bomb detection dogs.

He also worked with cadaver dogs whose responsibility is to seek out bodies trapped in buildings or elsewhere.

Stephen returned to Malaysia in 1986 and started a dog training centre in Sungai Buloh before shifting to his present premises in Cheras a few years ago. He now provides obedience training to dogs, especially for dog owners whose dogs have not been properly trained.

“Yes, there may be a lot of breeders but not many are good trainers. As a result, many dogs may pick up bad habits or ways and their owners have to send them to us for training or re-training,” he said.

He said he usually took about a month to train a dog to be of greater use to its owner.

Stephen revealed that he was recently asked to apply for permanent residence or a ‘green card’ from the US Citizenship and Immigration Services.

“A lawyer handling such applications said my years of training dogs and extensive education in my field would allow me to qualify. But Malaysia is my country and my family and dog training business are here. I want to develop my business further,” he said.

For a start, he has expanded his present premises to about half an hectare to accommodate more dogs to be trained. — Bernama