Sunday, January 19
You are at:Home»News»Sabah»Dragonair to add Saturday flight from Kota Kinabalu to Hong Kong 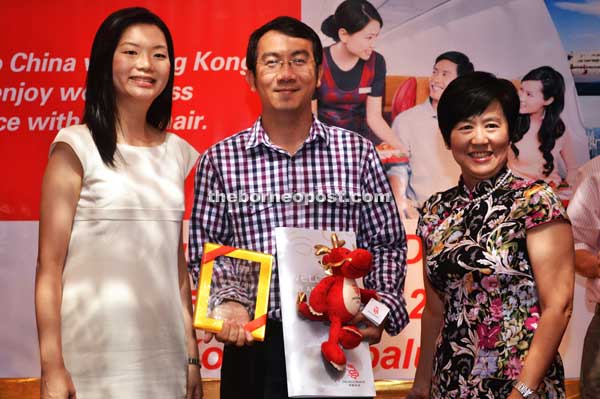 AWARDED: Anders Chung, outbound manager of Popular Express Travel Sdn Bhd, Kota Kinabalu, receiving an award from Wu (left) and Choi (right) on behalf of his agency for being Dragonair’s top travel agent in Sabah in 2011.

KOTA KINABALU: Dragonair will be adding a Saturday flight from Kota Kinabalu to Hong Kong for a seasonal schedule service from July to September.

Its Sabah, Sarawak and Brunei manager, Anna Choi, said the flight will depart Kota Kinabalu at 8.35pm, arriving Hong Kong at 11.35pm, which makes it an ideal connection for the flights of its sister airline, Cathay Pacific, departing 1.25am, Narita 1.00am, Incheon, Korea 1.00am and Jeddah 1.30am.

The returning Dragonair flight will depart Hong Kong at 4.40pm, arriving at Kota Kinabalu at 7.40pm. At the moment, the Hong Kong-based airline is flying five times a week from here to the former British territory from Monday to Friday.

Speaking at the Dragonair agents appreciation dinner here on Thursday, Choi announced that Dragonair is resuming scheduled service to Xian, Guilin in April and May, Taichung in May as well as adding new destinations to Jeju in South Korea from May, Chiang Mai in Thailand for seasonal schedule from July to September.

“Other than adding more destinations, frequencies and capacity, Dragonair will expand the fleet by adding six additional aircraft in 2012 — four A320s and two A330s, making our total fleet size from the current 32 to 38 by the end of the year.”

On the cargo front, the new cargo terminal at Hong Kong International Airport developed by Cathay Pacific is progressing on schedule for operation next year.

“The terminal is designed to enable the most efficient flow of cargo, and facilitate speedy processing of all types of cargo, allowing a shorter trans-shipment connection window and shorter queuing times for trucks,” Choi added.

In her speech, Choi said Dragonair was voted World’s Best Regional Airline in the annual World Airline Survey run by Skytrax for two consecutive years in 2010 and 2011.

“Dragonair will continue to strive in offering premium and reliable services to our passengers by hardware upgrade, well-trained staff, good aircraft on time performance and in-flight safety,” she stressed.

The event also included the presentation of awards to Dragonair’s top five travel agents and top cargo agent in Sabah for year 2011.