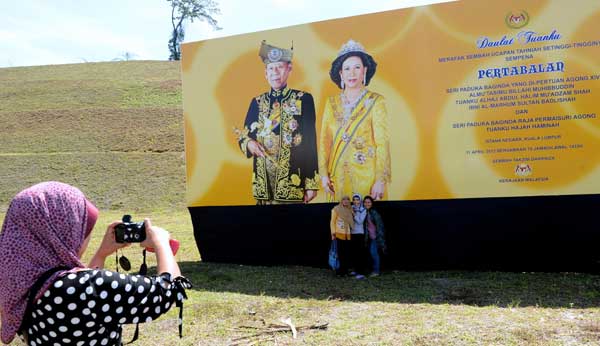 DAULAT TUANKU: A Thai tourist seen taking photograph of her friends in front of the Agong and Permaisuri Agong signboard at the entrance of Istana Negara in Kuala Lumpur. — Bernama photo

KUALA LUMPUR: Today, the Sultan of Kedah, Tuanku Abdul Halim Mu’azam Shah, who ascended to the throne succeeding Tuanku Mizan Zainal Abidin of Terengganu, will be installed as the 14th Yang di-Pertuan Agong.

This is the single most auspicious national event in Malaysia. It is in line with the provision under Article 32(1) of the Federal Constitution which among other things stipulates that: “There shall be a Supreme Head of the Federation, to be called the Yang di-Pertuan Agong, who shall take precedence over all persons in the Federation…”

Tuanku Abdul Halim is the only Sultan to have the opportunity to be installed as the Yang di-Pertuan Agong for a second time. He ascended to the throne as the Fifth Yang di-Pertuan Agong between 1970 and 1975,
the period which saw the
leadership transition between the First Prime Minister of Malaysia Tunku Abdul
Rahman and Second Prime Minister Tun Abdul Razak. Tuanku Abdul Halim is the nephew of the Tunku.

Historically, the post of the Supreme Head of the Federation as per Article 32(1) was initially proposed by the Reid Commission as the Yang di-Pertuan Besar — something which was a reflection of an idea by Tunku Abdul Rahman, the First Prime Minister of Malaysia, after observing the rotational monarchy system in Negeri Sembilan.

In Negeri Sembilan, the Undang Yang Empat as the ‘Rulers’ or ruling chieftains elect a King for the state in accordance with the state’s custom and tradition.

When the views of all parties representing the Malay Rulers, Umno and the Alliance Party as well as numerous others were taken into consideration, the title of Yang di-Pertuan Besar was replaced with that of the Yang di-Pertuan Agong so as not to create confusion with the King reigning in the custom-rich state.

His Majesty the Yang di-Pertuan Agong is ruling based on the concept of Constitutional Monarchy, a King who has to listen to the advice of the Cabinet or its representative (normally the Prime Minister) as provided for under Article 40 of the Federal Constitution.

His Majesty the Yang di-Pertuan Agong shall be regarded as the Paramount Ruler and the vertex of the sovereignty of Malaysia.

The people regardless of race, religious background, culture or beliefs feel honour-bound to accord respect and recognition to His Majesty the Yang di-Pertuan Agong. True, His Majesty is a Malay King and a Muslim, but in terms of nationhood, he is the King for Malaysia and its people.

It is only that Queen Elizabeth’s royal status is not rotational as the Anglo-Saxon monarchy dates back 400 years ago, while Scotland and England’s royalties formed a union in 1603.

After April 11 the official photograph of His Majesty the Yang di-Pertuan Agong and Her Majesty the Raja Permaisuri Agong, as featured in this article, will be displayed in all government offices in each state. The same goes in all the 104 Malaysian missions abroad.

The concept and practice of the Constitutional Monarchy in Malaysia has been accepted and acknowledged by various parties, including the Reid Commission, to be the most suitable for the country.

This is due to the fact that prior to independence, it was the Malay Rulers who had been holding the reign of power and sovereignty in each state.

Although due to tumultuous historical process, states like Penang, Melaka, Sarawak and Sabah ended up without a King, the monarchy rule continued to gain recognition, especially under the British colonial administration.

After 1963, all states which are without a King (Penang, Melaka, Sabah, Sarawak and the Federal Territories) accepted His Majesty the Yang di-Pertuan Agong as their Constitutional Monarch although there was no proclamation made to that effect.

The Yang di-Pertuan Agong is a King who rules in accordance with the advice of the Executive branch. Indeed His Majesty has a long and complicated list of responsibilities and functions for the three branches of the Government — the Executive, Legislative and Judiciary.

His Majesty appoints the Prime Minister, the Ministers and Deputy Ministers, the Attorney-General, judges at all levels (except at the Magistrate’s Court), and commissions Malaysian ambassadors and high commissioners for their duties abroad.

His Majesty, as stipulated under Article 41 of the Federal Constitution, is the Supreme Commander of the Armed Forces of Malaysia apart from having the power to grant pardons, reprieves and respites in respect of all offences which have been tried by court-martial and all offences committed in the Federal Territories of Kuala Lumpur, Labuan and Putrajaya.

When the Internal Security Act (ISA) 1960 was still in force, His Majesty could also act upon the appeal by the ISA advisory board. He also has the power, upon being advised to do so, to declare a state of emergency in accordance with Article 150 of the Federal Constitution.

Although matters regarding national policies can also form an agenda for the Conference of Rulers, most of the issues being deliberated and considered are matters concerning the royalty as well as pardons, reprieves and respites, Malay customs and matters concerning Islam.

Normally the Conference of Rulers also deliberates on certain appointments such as those of judges, and the rules made under Article 32 concerning the public service. In short, His Majesty the Yang di-Pertuan Agong is involved in many things and matters relating to his position as the Paramount Head of State.

Special programmes starting from April 11 to 21 will certainly draw the attention of the people. Although the practice and line-up of events would not be much different from the practice in the past owing to need to stay true to the tradition, the Main Committee on the Installation of the Yang di-Pertuan Agong will be focusing on the theme “Raja dan Rakyat Berpisah Tiada” (The Ruler and His Subjects Are Always Together).

The installation ceremony will be attended by the Monarchs and State Governors on April 11 (Wednesday) and will start from 9am.

In short, the theme stresses on the notion that “there will be no King without his people” and that the relations between the two entities should be carefully safeguarded in that the people’s interest should not be neglected and at the same time, the Constitutional Monarchy institution should be upheld and respected.

On April 12 (Thursday), there will be the recital of the Yassin at National Mosque followed by a special sermon on Friday, April 13. There will also be other religious events to express well wishes for His Majesty.

There will be a golf tournament on April 14 (Saturday) at the Glenmarie Golf & Country Club, in Shah Alam from 7.40am.

The ‘Our King’ exhibition will be held on April 15 (Sunday) from 11am at the old Istana Negara. It will showcase numerous aspects of the monarchy rule and the institution of the Yang di-Pertuan Agong since 1957 until to date.

In conjunction with this, some 50,000 booklets, titled ‘Raja Kita’ (Our King) will be distributed especially to schoolchildren and youngsters to nurture their knowledge on the royal institution, particularly the Yang di-Pertuan Agong.

Her Majesty the Raja Permaisuri Agong Tuanku Hajah Haminah will fete a large group of children at the Multipurpose Hall of the new Istana Negara on April 21 from 9am. Numerous fun-filled programmes for children will take place, thus driving home the point on the importance treating children in a friendly and affectionate way.

A massive ‘Raja dan Rakyat Berpisah Tiada’ performance will be held on the night of April 21 at Dataran Merdeka and this will be the grand finale of the installation ceremony.

On that night, there will be a showcase of numerous cultural performances by various races, as well as music and songs and a variety of interlude programmes befitting a glorious night for our King.

Events taking place during the period between April 11 and 21 will definitely demonstrate the uniqueness of a society centred on the 1Malaysia Community: that we are one in diversity.

We are one in determining our nationhood objectives and we dare to have differences in opinion to put forth the best for Malaysia. It is in this endeavour that the Royal Institution — His Majesty the Yang di-Pertuan Agong — will come as the pillar of our strength.

His Majesty is not only a symbol of nationhood, of strength and unity but also a symbolism steeped in sovereignty.

The Ruler and His Subjects Are Always Together.