Saturday, February 29
You are at:Home»Sports»Sibu gears up for motor race 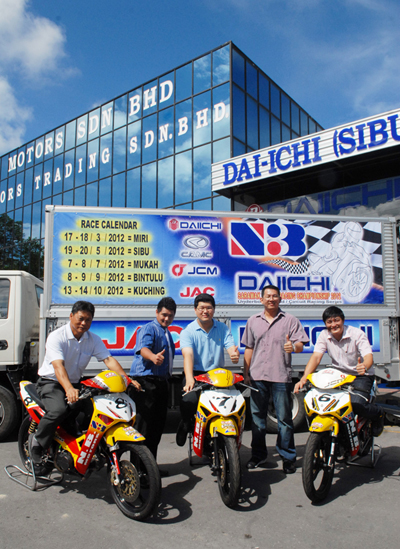 SIBU: The organiser of the Daiichi Sarawak Motor Racing Championship 2012, Xport Wear Enterprise, is upgrading the race into an international event next year to help promote sports tourism.

Speaking to The Borneo Post yesterday, event manager Tony Wong disclosed that Xport Wear Enterprise planned to invite racers from the neighbouring countries such as Brunei and Indonesia.

“We hope to upgrade the race into an international event next year. We are targeting 10 to 20 riders from these countries to promote sports tourism,” Wong replied when asked on future plans for the event.

Slated to be held on May 19-20 this year at Sibu Town Square, the Daiichi Sarawak Motor Racing Championship is an eagerly awaited annual event.

“We have invited riders from Brunei and Indonesia to participate this year but their respective governing bodies did not issue them the required permits to take part,” Wong lamented.

Met after the handing over of sponsorships by Daiichi and NB Motors Trading Sdn Bhd here, Wong said for cub prix races, Sibu is currently the only place that had a street racing track in South East Asia.

“The sponsorship among others included 10 units of specially modified bikes for the competition,” said Wong.

On the race, Wong said they had received overwhelming response with some 50 riders registered thus far.

“The majority of the riders come from Miri and Kuching with some from Sibu, Sri Aman and Mukah. The riders from Kuching all have licenses issued by Sarawak Automotive Racing Sport Association (SARSA),” Wong explained. He added that the race involved motorcycles with 115 cc capacity and below.

On the objective of the event, Wong said it was aimed to promote legal and safe racing, reduce illegal racing and provide a platform for those interested in motorsports to learn, as well as upgrade to become a professional racer.