Wednesday, June 3
You are at:Home»News»Sabah»CM visits reporter who is in coma 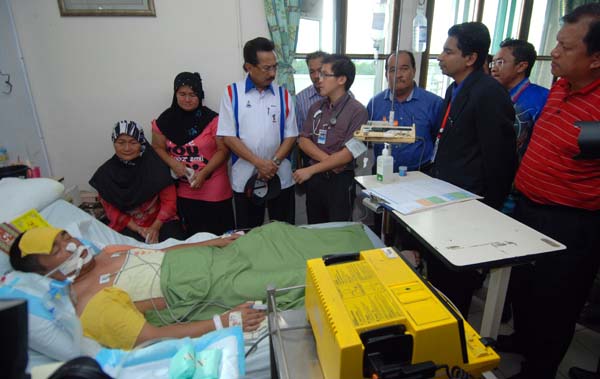 Musa being briefed by Pang on Kamaruddin's situation, while his sisters, Bangkuai (left), Yogendra (second left) and others look on.

KOTA KINABALU: Chief Minister Datuk Seri Musa Aman took some time off from his busy schedule to visit New Sabah Times senior reporter, Kamaruddin Liusin, 47, who suffered from a stroke due to high blood pressure before going into a comma on Wednesday.

He is currently put under close observation at Queen Elizabeth Hospital I male ward under the supervision of medical specialist Dr Pang Hoong Chee.

Kamaruddin, who was also the Sabah Journalists Association deputy president, has been in the journalism line for about two decades.

“We have explained to the Chief Minister and his family members of his condition,” he said.

During the visit, Musa also made a personal donation to Kamaruddin.

Jouti was warded at QEH I on Sunday after a stroke.