Tuesday, August 3
You are at:Home»News»Sarawak»The more the merrier 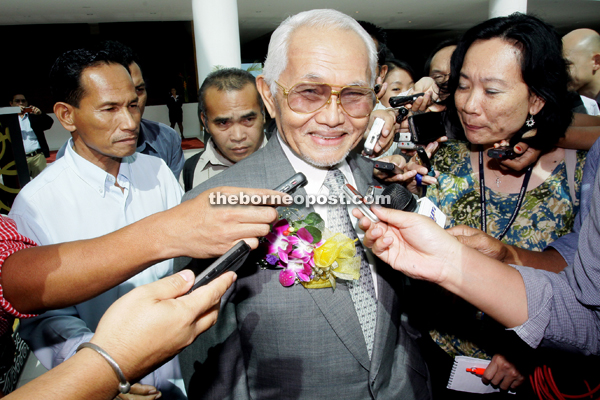 In fact, the chief minister told reporters yesterday that he regarded the new party as ‘a fresh setting’ for politics in the state, and that its existence would give the electorate another option to consider come the 13th general election.

“Well, it is part of the political scene of Sarawak. We have embraced democracy. One more party joins in, why not?

“It is up to the people to choose,” he said after opening the 50th Multiple District 308 Lions Convention here yesterday. He was asked to comment on the formation of SWP whose application was approved by the Home Ministry earlier this week.

To another question, Taib said SWP was at liberty to contest anywhere it liked.

On Thursday, SWP pro tem president Dr Ong Lark Sai gave contradicting responses to reporters. On one hand, he said SWP would be BN-friendly but, on the other hand, he admitted that they might challenge BN in the coming parliamentary polls.

“We will study the seats on a case-by-case basis. We will probably target rural areas.”

Recent news has it that the party was eyeing constituencies traditionally allocated to Parti Rakyat Sarawak (PRS), a BN component party, come the election.

Dr Rundi, who is also Parti Pesaka Bumiputra Bersatu (PBB) secretary-general, said he still did not know the ideology of SWP but it would pose no threat to BN.

“If they come to oppose, we will fight them, if they come as a friend, we will see how far it goes. As far as threat is concerned, I do not think there is one,” he said.

He said SWP’s claim to be a BN-friendly party was irrelevant.

He believed that the establishment of SWP was based on a personal agenda.

It was reported in the media yesterday that the newly registered party was undecided on its alliance in the coming general election.

It was also reported that the party had indicated it would go head-to-head against BN component PRS in the election.

Asked whether SWP would pose a threat to PRS, Dr Rundi said that was yet to be seen.

“We must remember that we practise an open system in politics in this country. If the party does not violate the law, there would be no difficulty getting an approval from the ROS, so we must respect the ROS decision,” he said.

He advised the newly registered party to look into the welfare and the well-being of the state as it was important for Sarawak to remain stable.