WHAT is our earth really like underneath the concrete and tarmac? What sort of soils do we have in gardens and what are their origins? Pedology –the scientific study of soils – is not for the faint-hearted. 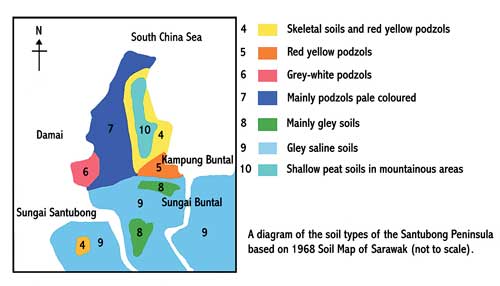 How many of us have gazed into a deep pit in our neighbourhood where diggers have excavated holes to lay drainage pipes or for the foundations of new buildings? I frequently look into pits dug around the world and study the colours, layers, and composition of the sediments in the soil profile and quietly assess the quality of the soil in each location.

Former Sarawak assistant director of agriculture PU Chien, in his weekly gardening column in thesundaypost, gives valuable advice on how we can improve the quality of our garden soils to promote the growth of selected plants.

He is indeed a superb pedologist, for he clearly distinguishes between acid, neutral, and alkaline soil types and the texture of soils – the latter affecting drainage. The course of additive nutrients he advises should stimulate plant growth to compensate for very high rainfall, high evapo-transpiration rates, and high mean annual temperatures.

The texture of soil can be gauged by what I call the spittle test. From this, you can determine the drainage capability of your garden soil. Simply take a handful of soil, slightly wet it by spit and see if, by rubbing it together, you can make a long worm.

If it crumbles, then it is mostly composed of sand. If you can create a long worm, then it is composed of loam or clay. Loamy soil has sand, silt, and clay in relatively even proportions (roughly 40 per cent, 40 per cent and 20 per cent respectively). If the worm breaks in trying to join the ends together, it is certainly a loamy soil but if you can complete a circular form and join the ends together then you have a clay soil, which is easily waterlogged.

Soil acidity is measured in pH, the activity of hydrogen atoms found in the water content of a soil. Interestingly, the acidity and alkalinity of soils was first measured by Danish soil scientists in the late 19th century. For some unknown reason they used pH in French terms as puissance d’hydrogene.

The pH scale is a logarithmic scale so that a pH 4 is 10 times more acidic than a pH of 5 (pH indicators are like plastic thermometers, for you simply pop them into wet soil and they give you an immediate record of the soil’s acidity or alkalinity levels).

Soil may be composed of several ingredients:

•    An inorganic fraction of mineral matter mainly derived from the bedrock at the base of the soil.

•    An organic fraction of mainly decayed vegetation – often referred to as the humus layer.

The quantity of air and water within a type of soil fluctuates according to the natural drainage and aeration of the soil by the burrowing action of animals, or by man’s activities. Living creatures such as worms, beetles and termites work the soil by bringing nutrients to the surface or churning the soil.

Soil type develops over time with many factors affecting its constitution.

How does the soil affect our houses? Shrinkage cracks occur in walls and plastered surfaces when we have a prolonged period of dry weather. Whilst we may complain about an extended session of rain, the air spaces in our soil filled with rainwater allow the soil beneath our foundations to expand, thus decreasing the width of the cracks! My house, built in 1872, in a temperate climate, also displays shrinkage cracks in exceptionally dry northern hemisphere summer with no evidence of such in a normally wet summer.

Here in Kuching, with urban expansion and redevelopment, we frequently see pile drivers hammering into the bedrock iron supports for new buildings, which must go down to a great depth, until the rods hit the underlying sedimentary parent rock. Thirteen per cent of Sarawak’s soils are mainly deep peat soils, usually more than three metres thick. Civil engineers will agree that the construction of high-rise buildings, including flyovers, requires deep foundations.

Most tropical soils display a largely siliceous (sandy) content as the oxides (specially of iron and aluminium) are washed deeply into the soil by the high rainfall. In a two-metre deep pit you will observe yellow top horizons (bands) and as you dig deeper the soil becomes redder owing to the deposition of the once near surface oxides. This process is known as leaching – literally the draining of soluble soil constituents, including nutrients, from the soils top horizons that become increasingly acidified over time.

Chemical reaction doubles for every 10 degree Centigrade increase in temperature and this renders most of our top soils infertile, hence the need to replenish our garden soils with fertilisers. However, some highly adapted plants, such as the pitcher plants growing on the sandstone plateaus of Bako National Park, thrive on the acidic, well-drained, infertile sandy soils.

To illustrate the variety of soils types in Sarawak, let’s examine at the Santubong Peninsula. Look at ‘The Soil Map of Sarawak, Malaysia Timor’, 1968, which is still the definitive map used in identifying soils in West Sarawak. Seven main soil groups have been identified in the Santubong-Buntal area.

Do remember that this soil map was produced 44 years ago and as soils may change over time, thanks to human intervention, there may be some changes in classification. This soil map is an amazing piece of research and cartography and even a simplified map reveals the diversity and distribution of soil types at Santubong.

There, the predominant soil is the podzol – a leached soil composed of pale coloured sands with accumulations beneath the surface (re-deposits) of the surface humus (decayed organic matter) and iron. Such soils may have accumulated on old river alluvium or on coarse textured sandstone rocks, thus are usually well drained.

The second largest group of soils lie on the backbone of the peninsula, at the lower slopes of the mountains. These are shallow skeletal soils and red-yellow podzols. They are composed of loamy sands and clays and the trees on the slopes are well adapted to these conditions.

On the higher mountain slopes there is a mixture of podzols with shallow peat accumulations (less than one metre deep) in hollows, whereas these slopes are otherwise too steep for any soil development so they largely consist of bare rock.

The Damai beach area holds a pocket of moderately deep grey-white podzolic soils and grey or pale yellow loamy sands, which developed on old beach material. The penultimate soil type is at Kampung Buntal where red-yellow podzols are found on the underlying sandstone rock.

Finally in the south of the Santubong Peninsula lie outcrops of gley soils in poorly drained sands and clays on the floodplain areas of the Santubong River. The water table here is very near the surface and the grey saline soils are occasionally inundated by seawater. As world sea levels rise, such soils as these and the peat soils near coastal areas in Sarawak will be most vulnerable to greater incursions of seawater; seeping into the soils and thus rendering them hostile to farmers.

Drainage of peat soils in coastal areas is harmful because it will increase the subsoils capacity to absorb seawater seepage, especially in areas where the water table is below the high tide mark.

This is but a thumbnail sketch of the great variety of soils we have in Sarawak, for I have not mentioned, until now, the limestone or rendzina soils of the Bau area. I hope that I have whetted your appetite to learn more about the soil types in your area and garden.

Follow PU Chien’s knowledgeable advice for your garden, as plants and soil types are interrelated. Plants can recycle the nutrients washed deeper into our soils by the heavy rainfall input through their root systems.

May our gardens and city parks continue to bloom.