Saturday, August 20
You are at:Home»News»Sarawak»Motorcyclist killed after crashing into trailer’s rear wheel 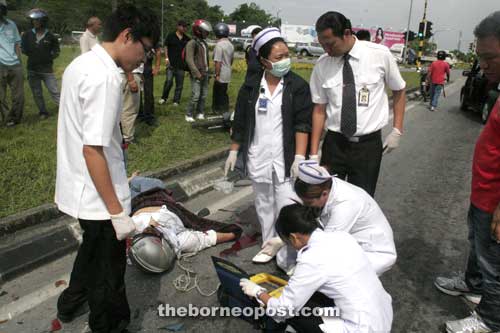 FUTILE: Paramedics checking the victim for possible signs of life.

KUCHING: A female Territorial Army member was killed when her motorcycle collided with a trailer at a traffic light junction at Mile 4 1/2 Penrissen Road yesterday morning.

The deceased was identified as Saftuyah Sitam, 49, of Kampung Pinang in Samarahan.

The accident occurred around 10am when Saftuyah was heading to a boarding school in Matang to visit her 14-year-old daughter studying there.

A lorry driver claimed the victim had earlier overtaken his lorry near the traffic light junction and was travelling beside the trailer when the incident occurred.

He said the motorcycle crashed after coming into contact with the trailer’s rear wheel, adding the trailer driver initially did not know what had happened and continued on his journey until a passing motorist signalled for him to stop about 300 metres away.

Paramedics were called to the scene to attend to Saftuyah, who sustained serious head injuries, but pronounced her dead at the site. Traffic police personnel were also on hand to investigate the fatal accident.

A source said that Saftuyah, who also has a 10-year-old daughter, made it her weekly routine to visit her elder daughter every Friday at the boarding school.