Wednesday, August 17
You are at:Home»News»Sarawak»PM: Only winnable candidates 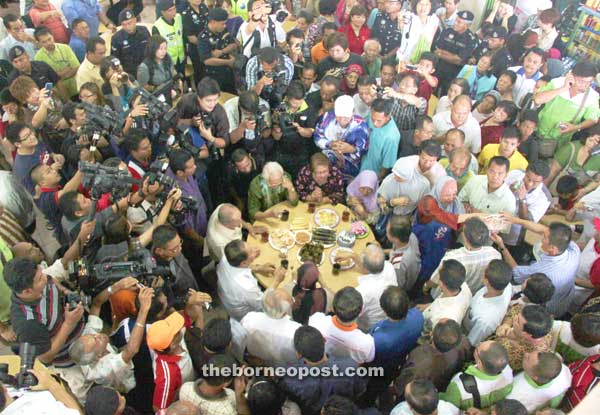 KUCHING: Barisan Nasional party leaders in the state have been cautioned against nominating party members they favour for the coming election at the expense of more winnable candidates who are not in their good books.

I don’t want your favourite persons to be candidates,” he said.

The prime minister pointed out that it was pointless for party presidents to strengthen their position in the party but lose the parliamentary or state elections.

“Sometimes we think that winning party elections is more important than winning elections. So we put up candidates who could strengthen our positions in the party.

That doesn’t make any sense because you are only shooting yourself in the foot,” he said.

And I want Sarawak to develop. “And I want to continue to do more for Sarawak just like the previous prime ministers did for Sarawak because it has huge potential and I can see there is so much we can do for Sarawak. But we need the mandate from the people,” he said.

Najib also stressed that the present government which had been in power for the last 50 years must not lose its focus in serving the people.

That’s the essence of parliamentary democracy,” he said.

He  believed that the people of this country still need the BN to lead it to face the future.

“I cannot see the opposition do what we can for the people of Malaysia.”

The prime minister warned that the people of Sarawak would suffer if BN lost the federal government in the coming election.

Najib also advised the leaders to continue to serve the people in humility and hard work.

On another note, Najib was confident that Taib would be able to deliver for the BN in the coming general election.

Earlier, the chief minister pointed out that there was no point to have a change for the sake of it without benefiting the people.

The chief minister who is also the state BN chairman questioned the ability of the opposition leaders to lead the country.

“I myself feel they can’t rule the country. I am sorry to say that. I am old in the game and believe me, there is none of them who can plan for a better future for this country,” he added.