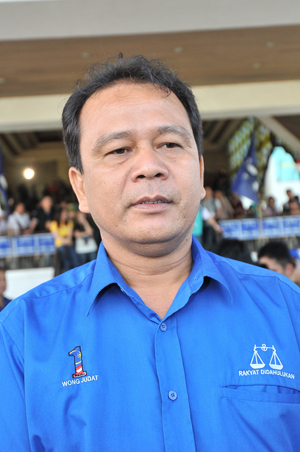 KUCHING: If indeed reports that Meluan assemblyman Wong Judat was a guest-of-honour at a function organised by newly registered Sarawak Workers Party (SWP) in Entabai, Julau last Saturday are accurate, many quarters think he had obviously put himself or

This is because Barisan Nasional (BN) is known to be very concerned and strict with members of its component parties who try to sabotage or undermine a fellow member.

It was for a similar offence that former assistant minister Dr Patau Rubis was sacked by Sarawak National Party (SNAP) in the 90s for campaigning against BN in Serian during a particular election.

As a consequence, Dr Patau lost both his assistant minister portfolio and senior vice president post in SNAP, and also brought his political career to an end despite trying to continue his struggle by forming State Reform Party (STAR). In Wong’s case, it was said his presence at the event in Entabai, which was reported to be organised by SWP, was tantamount to going
against BN incumbent MP for Julau, Datuk Joseph Salang Gandum, putting him at risk of facing the same fate as Dr Patau.

Former SPDP leader Datuk Peter Nansian Ngusie, when commenting on the issue yesterday, said what Wong had done was very serious especially when he had openly declared his alliance to SWP, a party known to be opposing Parti Rakyat
Sarawak (PRS) – a BN component party.

“The problem created by Wong against PRS through SWP cannot be construed as Wong’s problem alone but it is a problem of BN
since SPDP is also a component of BN.

“So if SPDP cannot take immediate disciplinary action against Wong, BN should interfere to discipline SPDP since Wong is still a member of the party and failing which SPDP itself should be sacked from BN,” he said.

Earlier, he said Wong’s presence at the function in Nanga Entabai was a very clear manifestation that SPDP had conveniently swept the alleged personal vendetta between Wong and Salang under the carpet.

“Mawan (SPDP president Tan Sri William Mawan Ikom) had claimed that it was their personal vendetta but has he (Mawan) ever made any effort to take action against Wong who had openly declared his alliance to SWP which is tantamount to going against BN incumbent in the person of Datuk Joseph Salang?

“So far SPDP had been silent on the matter and the question now is whether SPDP condones or supports Wong’s action to openly criticise Salang, a fellow BN man,” asked Nansian.