Monday, August 10
You are at:Home»News»Sarawak»Economic development next on Kapit’s agenda – MP 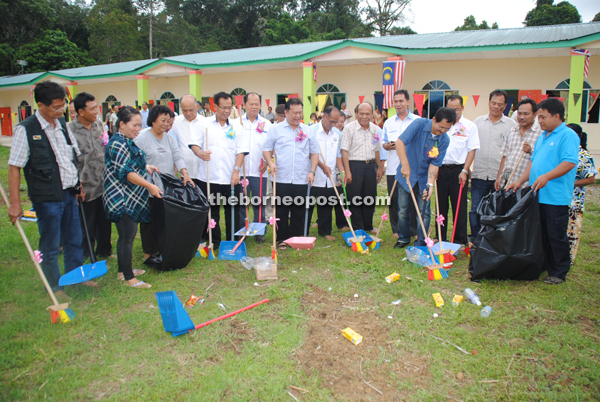 CLEAN UP: Nanta (centre) at the launch of a gotong royong under the Local Agenda 21 programme.

“In this respect I call on the state and federal government to focus on economic development in Kapit,” he said.

On the housing aid development projects (Projek Bantuan Rumah-PBR), Nanta said he was sad the project failed to benefit the needy especially in Pelagus area.

“I personally inspected the PBR project at Pelagus recently and took several pictures of the work done. I was disappointed at the work done by the contractor and lack of monitoring by the relevant agency. The project is worth RM12,000 but what was done by the contractor was minimal like replacing a door of poor quality and a few sheets of roofing. Hence the recipients are not benefiting from the project,” Nanta explained.

“The funds for the project are channelled to the District Office which will pay the contractor. If the contractor did not complete the project satisfactorily or fail to carry it out, there is no way the DO can proceed with the payment hence the money would not be spent and the people not benefit from it,” he said.

“Projects not completed or implemented are the basis for the next fund allocation. Once less fund is received, those at the losing end are the needy in those areas.”

On the Local Agenda 21 and community development programme, Nanta said they were meant to benefit the rural community as was the government’s priority under the prime minister’s 1Malaysia concept.

Nanta said the PM was committed to develop the people and walked the talk during his three years as PM.

“We need leaders who take the people’s welfare to heart. He has many good policies and touch point programmes for the people. The PM needs us to win for him to continue his good work and leadership,” he added.

Later Nanta presented a RM28,600 grant to the Village Security and Development Committee (JKKK) of Rumah Nyulang to develop the longhouse.