Tuesday, July 5
You are at:Home»News»Sarawak»Yiu cremated after hour-long Buddhist rites 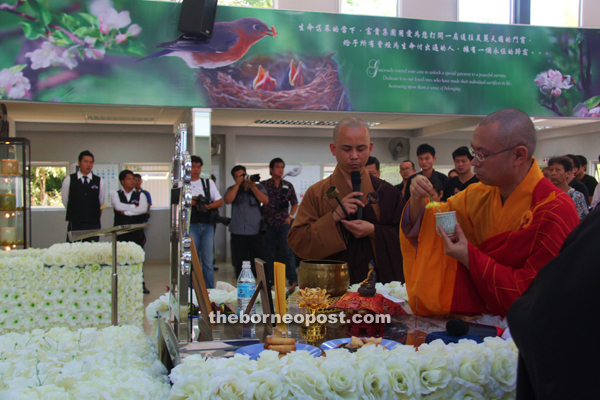 REST IN PEACE: Yiu’s siblings placing their incense sticks in front of her picture

SIBU: The remains of journalist Patricia Yiu who died in the line of duty in a tragic accident in Mukah on Wednesday was cremated at the Nirvana crematorium in Oya Road here yesterday.

The coffin bearing her remains arrived at the crematorium about 11am for an hour-long ritual conducted by two Buddhist monks.

“We met each other mostly during our association’s activities.

“I didn’t get to meet her very often when covering general assignments because she was a feature writer during her time in Kuching,” Wee recalled.

She described Yiu as a very cheerful and friendly girl whom she and other colleagues would miss dearly.

Wee said they would also miss fellow journalist, Gaing Kunding, who died in the same accident.

“Although we do not know Gaing very well, we would miss him too,” she reiterated.

Gaing, a reporter for The Borneo Post, and Yiu, a reporter with See Hua Daily, were killed when the Kancil Gaing was driving collided head-on with a bus at KM20 Mukah-Balingian Road.

They were returning back to Mukah after covering an assignment in Balingian when the accident occurred.