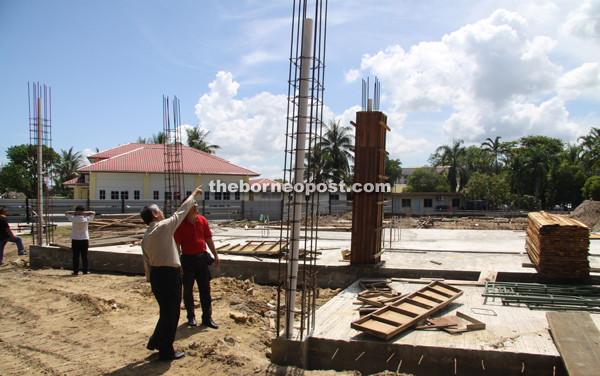 BUILDING UP THE CHURCH: The St Columba parish church building shaping up well from ground level as Cheong (left) and church members check out the work progress at the site

MIRI: The new St Columba Anglican parish church building project is on track for completion in November and a fund-raising dinner would be held on June 16 to top up the church building’s coffers.

On behalf of the fund raising committee, Parish Vicar Venerable Solomon Cheong appealed to church members, former students of St Columba primary and secondary schools, and well-wishing members of the public to support the fund-raising dinner and donation drive.

He thanked generous donors who had responded to an earlier call, and was pleased to announce that all the 68 pews for the new church building had been pledged.

“There is still a significant portion of furniture and fixtures such as IT equipments, sound system, air-conditioning and others for the church which needs to be filled,” he said.

The new building has a floor area of 10,200 sq ft and can sit 1,000. The main areas are the main worship hall, altar and chancel, Lady chapel, waiting room, vestry, creche, arc room, gallery, patio and steeple.

The floor and columns are presently taking shape at the site, and the church is confident that the appointed contractor would complete the building on schedule in time for the Christmas celebration this year.

St Columba Parish was founded in 1923 and named after an Irish missionary in the sixth century. The first church building was consecrated on March 18 that year by Bishop F.S Hollis who celebrated Holy Communion before a congregation of 59 people.

The fund-raising committee introduced personal pledging cards for working individuals in the congregation, raised funds through dinners, food sales and carnival sales to help raise fund for the main church building project that began this year.

A family pledging booklet for families to donate to the church features such as furniture and fixtures was also introduced.

Cheong said he hopes that all donations would be submitted by October 30.

The church has listed 71 items that are still required including the altar table, lightings and steeple with cross for those interested in donating to the church.