Tuesday, December 6
You are at:Home»News»Sabah»Committal order application against RSTC’s 13 rejected 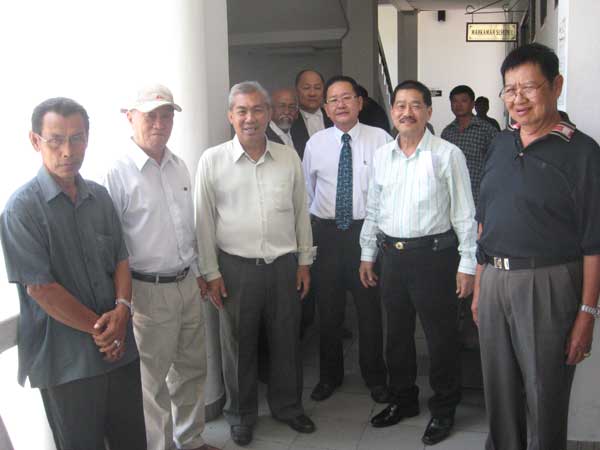 Some of the defendants at the High Court after the proceedings yesterday.

KOTA KINABALU: A life member of Royal Sabah Turf Club (RSTC) has failed in his application at the High Court here for leave to seek an order of committal against 13 members of the club for contempt of court.

The judge held that the club extraordinary general meeting (EGM) was held lawfully and there was no contempt of court on the part of all the members who attended the meeting.

Chin, who was represented by counsel Raymond Szetu and Tiong Jia Yee, had sought an order of committal against the 13 members for alleged contempt of court by interfering with and prejudicing the administration of justice, to wit, that on various dates between Sept 1 and Sept 22, 2011, they willfully supported, facilitated and participated in the club EGM held on Sept 22, 2011 for the purpose, inter alia, of approving the special resolution passed.

Chin also sought an order of committal against them for alleged contempt of court by willfully interfering with, circumventing and usurping the court jurisdiction over the granting of any stay of execution of its own judgment by supporting the adoption of the special resolution passed at the EGM.

Ravinthran had on March 25, 2011 found all the defendants liable for breach of fiduciary duty and ordered them to pay RM1.76 million jointly or severally to RSTC as well as ordering the defendants to give an account of the funds of RSTC they used for defending the action against them.

The court then also ordered the RSTC to be restrained from incurring further legal fees on behalf of the defendants after allowing Chin civil suit against 12 members of the club’s management team.

Counsel Jeyan Marimuttu and Claudia Lopez represented Aven, Syed Annuar and Jerian while the other defendants were represented by counsel PK Lim and George Ngui.