Thursday, April 9
You are at:Home»News»Sarawak»Angling to attract visitors to Sarawak 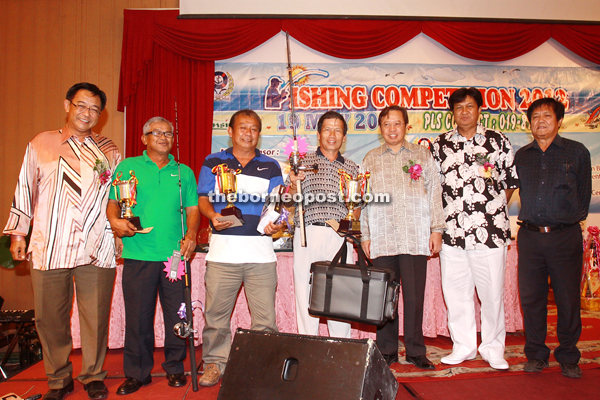 CONGRATULATIONS: Abdul Karim Hamzah (left), Abang Johari (third right), Khalid (second right) and Then (right) together with some of winners of the fishing competition after the prize presentation.

“Our fishing grounds are attractive for anglers in the region to spend time and money here participating in our angling activities,” he said at the Sarawak Boat Club (SBC) Fishing Competition 2012 prize giving ceremony Tuesday night.

The Miri Anglers Club has organised competitions that manage to attract anglers from as far away as China, he said.

“This means a lot of interests from anglers in the region to come and enjoy fishing in our waters,” he said.

Abang Johari said he had instructed Sarawak Tourism Board (STB) to include fishing and angling as part of the activities at Tanjung Datu National Park, along with snorkelling and turtle sporting at Talang Talang and Satang Island.

“At Tanjung Datu, we just unveiled an important landmark where we feel is the start of Borneo — ‘Where Borneo Begins’. It’s not far from fishing grounds, meaning we will have two products there,” he said, adding that the national park has much to offer in flora and fauna.

We have to promote angling together with our rich biodiversity, he said.

“I have been working together with Sarawak Forestry in charge of national parks to sell a package that includes the national park as well as angling.”

The fishing competition was divided into 10 categories, with three winners in each for landing the heaviest fish.

The overall winner for the heaviest fish was Liu Nyong Chew with his 10.35kg grouper. First runner-up was another grouper (9.55kg) landed by Mohd Suhaili, while second runner-up went to Lokman Wahab with his 9.45kg cobia.

For the overall team event, The Angler’s Tackles group reeled in 17.95kg of fish for the top prize, while the Commodore Group came in next with a haul of 15.7kg.