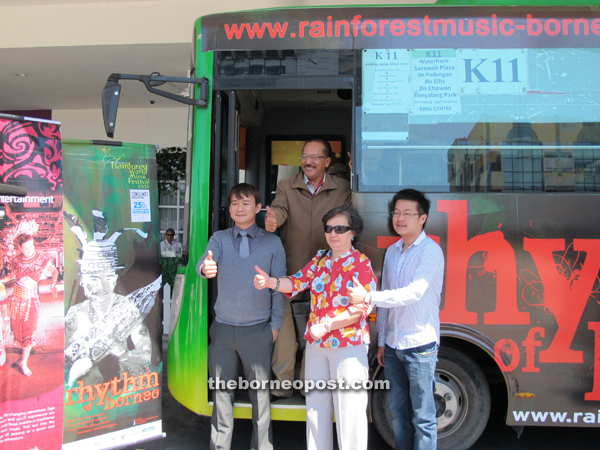 KUCHING: The Sarawak Tourism Board (STB) has called on local businesses to seize opportunities springing up from the three-day Rainforest World Music Festival (RWMF) from July 13.

STB chief executive officer Datuk Rashid Khan pointed out yesterday that businesses could develop packages that get festival-goers to stay for longer in the state.

“There are many ways to go about if we are innovative enough. Kuching city as well as the state have a lot to offer and it is all up to our people to market it,” he told a news conference when launching RWMF advertisements on City Public Link (CPL) buses yesterday.

Rashid said many young people, whom he described as ‘coming in for lifestyle and adventure’, would want good tourism packages.

“Kuching needs to be discovered, and there are many interesting places. You just can’t bypass the areas like that.”

He pointed out that Sibu is an ideal destination for eco-tourists.

“Sibu, in fact, is a place for eco-tourism, but you (travel agents) have to do it yourselves. Say for example, if one is to take an express from Sibu to Kapit, that is an experience one can’t have elsewhere. And they can choose to stay in one of the longhouses there.”

Commending CPL, Rashid said other operators could emulate the bus company by coming up with creative ways to assist STB in promoting the festival.

During the three-day event, CPL will provide shuttle services on an hourly basis from 10am to 12.30am daily, from the city to the festival site at the Sarawak Cultural Village (SCV). Rashid said this is an effort by STB to reduce carbon emissions in line with the government’s initiative to preserve the environment.

He called on festival-goers to opt for the shuttle service, which would in turn help the organiser to better manage traffic.

“We encourage visitors and the locals likewise to use our shuttle service so that there will be less cars being driven to SCV. In addition, they need not worry about parking.”

“Of course, the route covers other major shopping malls and hotels in the city including Merdeka Palace and 360 Hotel as well as taking our visitors along Jalan Padungan, Jalan Abell, Jalan Ban Hock, Main Bazaar and eventually SCV.”

Meanwhile, Hills Shopping Mall general manager Gabriel Hii said the three-day pass, sold at RM60 each, would take customers to places CPL covered in and around the city.

“Passes will be made available at various huge shopping malls, major hotels and B&Bs by June 8. In the meantime, we will announce the route and schedules on the STB website,” he added.