Saturday, August 15
You are at:Home»Features»Adding value to handicrafts 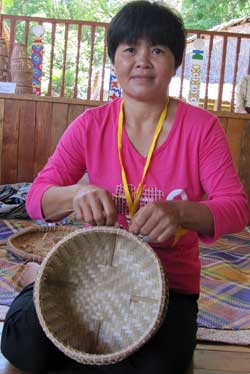 This is a good place to see not only the unique architecture of the houses built by the indigenious community but also the handicrafts they used as household items in the old days.

The community’s ingenuity in the choice and use of wood and other plant materials is evident in the construction of the houses.

I was informed the houses were built by a particular ethnic group to reflect its identity and ensure the cultural and historical authenticity of the houses.

To emphasise these aspects, the houses are furnished with items from yesteryear, including bamboo water containers, spoons and ladles, among many others.

Occasionally, activities such as handicraft-making demonstrations and sales, cultural dance performances and traditional games are held at the Village – usually during May to coincide with the state-level Harvest Festival Celebration.

The handicraft-makers, however, want more than just demonstrating their skills and selling their wares during this time. They are looking for steady income – and they also want to impart their skills to their children.

Simini Gondilo from Kampung Pelakat Sipitang, has been weaving baskets and winnowing trays since her teens. 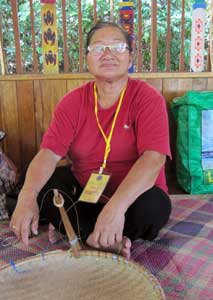 “I used to follow my mother into the jungle to look for materials like the right kind of bamboo and vines to make baskets, containers and all sorts of household items,” recalled the 54-year-old of Murut-Dusun descent.

It was through helping her mother that she honed her handicraft-making skills.

However, she lamented that since such items were now produced by factories, making them, especially baskets, from natural materials was no longer popular.

“We may gradually lose interest in making things with our hands. But for me, I keep making baskets because sometimes, I do get to sell them. I have a child who is interested in weaving but you don’t make much money from it,” Simini noted.

The lack of demand means she cannot sell in bulk, so she has to do something else to make ends meet.

She hoped some handicraft dealers would come up with a reasonable offer, saying this might encourage the younger generation to get involved in the business. 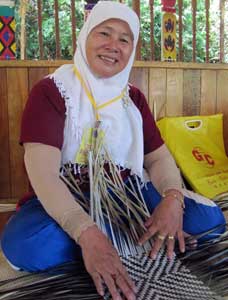 For Laminah Intang, also from Kampung Pelakat Sipitang, she learned the art of weaving mats from her mother.

Of Dusun descent, the 55-year-old is a security guard at a school in Sipitang but loves to weave dainty little mats for decorations during her free evenings.

“I can weave big mats. My mother and I used to make them for drying padi and as sitting and sleeping mats. It’s a tradition for Dusuns to have these things in the house.”

However, Laminah pointed out that sitting and sleeping mats were no longer all that popular with competition from more comfortable alternatives.

So these mats have now become mere decorative items. But Laminah believes there is a demand for them and she wants to explore their marketability.

“Those who wish to give away mementoes during official events can make use of these decorative items. The mats can be woven into trays and framed on the wall with beautiful motifs,” she said.

Laminah can produce three to five decorative mats a day and dealers who buy in bulk can be assured of supply.

Meanwhile, Margaret Kiat, from the Kadazan community in Kampung Sabandil Papar, is sought after for her handicrafts because among the things she makes is the popular Papar Kadazan headgear. 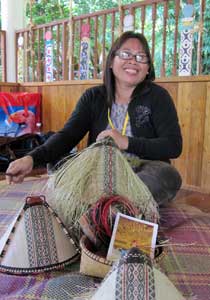 According to the 47-year-old, demand goes up during the Harvest Festival when the headgear is used to match the traditional costumes for the beauty pageant during the celebration.

Margaret learned how to make the headgear and acquire the material for it through her mother.

“I’m happy I can make a living from the skills I learned from her,” she said, adding that a headgear could fetch up to RM100 apiece.

She believes there is a bigger market for handicrafts such as hers and that more should also be done to market these art works as souvenirs.

Tinah Lobinin, 42, of Kampung Gana Papar, is confident the baskets, containers and winnowing trays she makes are marketable – just like other handicrafts.

Those looking for authentic local handicrafts can contact locals like her. They all have been making handicrafts since young.

Tinah of Dusun descent believes there is no compromise for authenticity.

She wants to impart her knowledge to her children and is happy to note one of her sons has shown interest. 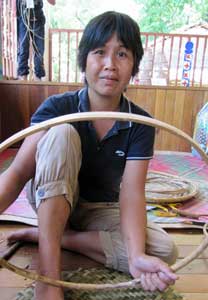 She now sells her handicrafts at the traditional market in Dongonggon Penampang and receives stipends for her goods.

“I’m happy with that because it makes me feel local handicrafts are still appreciated. I only hope there is a bigger market,” she said.

Kuing Golipok, 48, also from Papar, said she would be happy if someone could buy her hand-woven baskets in bulk.

“I make them in my spare time now as I have grandchildren to take care of while my daughter works to support us. But if I can sell a few of my handicrafts, I can actually help with our income. At least, I will have my own money.”

Adept at making handicrafts, Kuing said buyers could trust her to give them a good deal.

Other handicraft-makers are hoping their items can also be kept as souvenirs by dignitaries, tour operators and other tourism establishments.