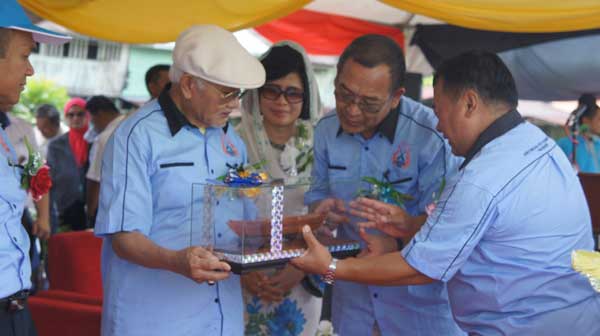 IMPRESSIVE: Taib (left) admires the uniqueness of a crafted ‘perahu bidar’ which is presented as a memento to him by an event organising committee representative. Also seen are Dr Toyad (second right) and Fatimah (third right).

BALINGIAN: The ever popular Pesta Kaul, Pesta Dalat and Pesta Balingian are set to become major events with the proposal for ‘Three Rivers Festival’.

The idea, which was conceptualised by Chief Minister Pehin Sri Abdul Taib Mahmud, will see participation of the communities from Mukah, Dalat and Balingian in organising the event at all the three locations.

“A fund can be set up to organise these events and with bigger capital, it will turn these events into a major event and not just an event for the locals to gather,” said Taib when closing Pesta Balingian at Batang Balingian Waterfront yesterday.

Taib elaborated that having such event on a larger scale and involving participation of the people from around the area would be a great way to promote the economy in the area, while enhancing inter-community ties.

“Therefore a tourism fund for the ‘Three Rivers Festival’ can be set up and the festival can be done annually according to turns,” he said, adding that it was not impossible for towns such as Dalat to manage a crowd of 20,000 with help from the surrounding communities.

Earlier on, Taib in his speech said his politics of development should not be construed as only a change in terms of economic scale.

“Changes within the community are not literally based on economics, but we want the people to change their mindset towards lifting their family status for the better,” he said, reminding that there was no point in bringing development if the people did not benefit and take advantage of it.

Pointing to better road connectivity and communication as a tool that was underutilised, he said the people particularly in the rural areas should use the Internet and Wi-Fi technology to promote their business.

“We understand that there is not much population in the rural areas. We need the numbers for businesses to come and the area to grow,” he said.

This, according to Taib, was why various development projects had been planned, among them the Sarawak Corridor of Renewable Energy (SCORE) where industries would be set up to benefit the locals through job opportunities that offered better pay.

“This formula is the best for Sarawak as our population is scattered all across the state, not to mention those in remote areas. It is impossible to gather everyone in one place or only in major cities,” he added.

The masterplan to develop more new townships from industries, he said, would result in more towns turning into cities in the future and the people should grab the opportunity and not be left behind.

Meanwhile, Mukah MP Datuk Seri Dr Mohammed Leo Toyad said the Barisan Nasional (BN) leaders in the state had the capability to improve the lives of the people in rural areas.

“We had seen tremendous changes, particularly in Balingian. Previously there were no tar sealed roads and we had to rely on boats. Now we have good roads linking Balingian to Mukah which also saves time,” he said.

At the same time, he urged the people not to be tricked by the opposition’s stories on the industries being set up in the area.

“There were claims that the Press Metal factory here is causing ecological damage to the Balingian River, but the truth is the images shown in the Internet were taken years ago before the factory was even set up,” he added.

The three-day festival, which started on May 25, saw various activities being held, with the regatta and water pump boat race becoming the major events.