Sunday, February 23
You are at:Home»News»Sarawak»STB invites French top travel bloggers to the state 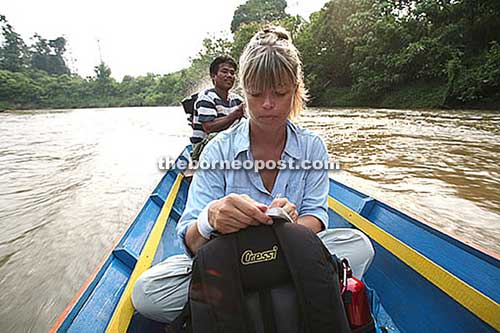 FRENCH TOP BLOGGER: Marie-Ange jots down notes while travelling in a longboat into the interior of Sarawak.

Marie-Ange Ostre and Sylvie Vollet’s official engagement was a combined effort by STB and Tourism Malaysia’s office in Paris.

A special tour programme tailored specifically to the interest of the European market was arranged for both bloggers.

Marie-Ange, who is well known in the travel and tourism circle, is also a photo journalist for the magazine ‘Reperages Voyages’ in France and her magazine is read and viewed on average by 500,000 people.

They are both very active in the French social media scene and capture excellent images to share with their subscribers and web contacts.

The involvement of the French bloggers would hopefully be a good opportunity to expand the reach via social media in France.

Both bloggers were also tweeting about their journey into Sarawak to about 30,000 followers online.