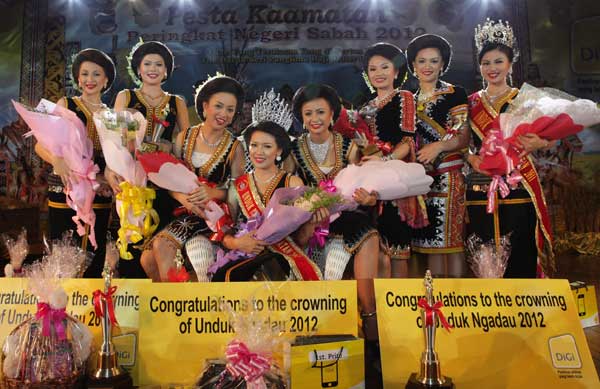 PENAMPANG: Melinda Louis created history when she became the first winner of the state-level Unduk Ngadau from Telupid.

The 22-year-old administration account staff from Kampung Gading beat 41 other finalists to win the crown at Kadazan Dusun Cultural Association here yesterday where the state-level Kaamatan celebration was held.

She was crowned by Toh Puan Norlidah R.M. Jasni, the wife of Yang Dipertua Negeri of Sabah, Tun Juhar Mahiruddin.

“I didn’t expect to win this title as all the finalists are very experienced and beautiful in their own ways. However, this winning is a special gift to my district, first time winning the state-level Unduk Ngadau,” said the winner.

“I was chosen to represent Telupid in the state level in 2008 but I did not manage to stand for my district because I had to continue my study,” said the second child of six siblings who took home RM68,800 worth of prizes.

Melinda will be a ‘Huminodun’ of the Kadazan Dusun Murut to promote the tourism of the state for a year, until the next Unduk Ngadau is chosen next year.

She is also expected to carry out social works such as raising funds for charities.

The fourth, fifth, sixth and seventh winners were Vanessa Samantha Manih of Tanjung Aru, Samantha Sharon C.E. Laujang of Penampang, Milviana Madrigal of Kota Belud and Raemma Justim of Tuaran who received a total of RM4,000 prizes from the sponsors.

After receiving the most votes through the DiGi voting contest, Juslinah Dian Rangga from Tawau was awarded the subsidiary title of Miss Popular Digi.

The winners were judged by five professional judges who evaluated their beauty and IQ level.

The Unduk Ngadau is a tribute to legendary Huminodun, the beauty among the beauties who without hesitation came forth to offer herself to be a sacrificial lamb to save her people from sure death from starvation.