Monday, September 26
You are at:Home»News»Sarawak»‘Placenta’ turns out to be dead baby 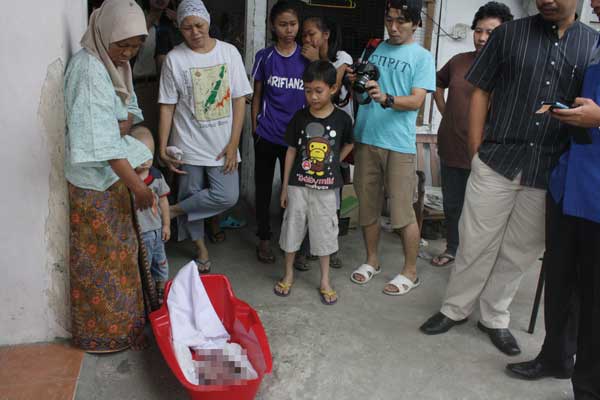 POOR BABY: Rubayah (left) pointing to the body of the dead baby girl

MIRI: The wife of an imam of An-Nur mosque in Kampung Pujut Tanjong Batu was shocked to find a dead baby girl wrapped in a sarong yesterday morning.

According to Rubayah Kaderi, 65, the baby, believed to be born prematurely, still had its umbilical cord intact.

On Wednesday a couple unknown to Rubayah handed over to her the sarong, requesting her assistance to dispose of a placenta.

As an imam’ wife, Rubayah serves the faithful in the village by assisting in the washing of the dead and the disposal of placentas of new born babies.

“The couple gave me their handphone number but when I tried to call them, nobody picked up my calls,” said Rubayah.

She said the couple came to her house on a motorcycle and they did not take off their helmet visors while talking to her.

After the couple handed over the sarong, she placed it into her washing machine before taking it out in the morning for washing, she said.

“I put it in the washing machine so that the cats would not get to it. I didn’t expect to find a dead body of a baby girl in the sarong,” said Rubayah yesterday when met by the Borneo Post.

The discovery attracted a large crowd to her house yesterday.

Rubayah added this was the first time such an incident has happened after more than 40 years helping local villagers wash and dispose of their new born’s placentas.

The body was later sent to Miri Hospital for a post-mortem and a police report has been lodged by Rubayah.