Thursday, August 6
You are at:Home»Business»KLIA2 on track operate by April 2013, construction in progress 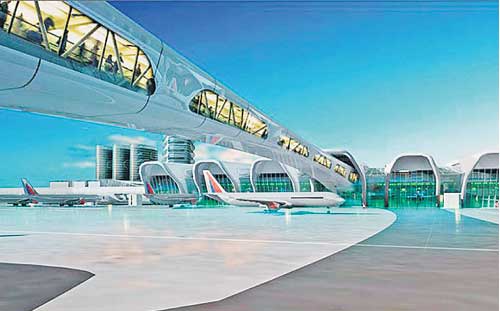 ON TRACK: Photo shows an artist’s impression of the pedestrian sky bridge across the terminals. KLIA2, the new LCCT in Sepang is on track for full operations by April 2013.

In a research note yesterday, it said with the construction now 51.78 per cent complete, the project was 89.9 days ahead of its original works schedule.

“This will provide room for the its existing operations to make the transition to the new terminal,” it said.

The research house said for the first time, Malaysia Airports Holdings Bhd (MAHB) had organised a site visit for the investment community to witness the progress of construction at KLIA2.

“We note that the upcoming KLIA2, which will be the world’s largest low cost carrier terminal with an annual capacity to handle 45 million passengers, is designed with the flexibility to accommodate future growth and expansion,” it said.

It added that KLIA2 would offer retail space of close to four times that in the current LCCT, and the revenue to be potentially chalked up might amount an additional RM120 million, at the very least.

The response from retailers had been overwhelming, with over 700 applicants eyeing the 225 outlets up for rental.

“We see MAHB generating strong cash flow not only from the rising demand for travel but also from the development of townships near KLIA.

“Of the RM345.4 million earned from rental and royalties, only RM158 million is contributed by KLIA and LCCT, with shares of RM122 million and RM37 million respectively.

“Since KLIA2 will have a higher portion of retail-related outlets, the revenue is expected to be higher in view of the higher average retail selling prices,” OSK Research said.

The research firm also maintained its ‘buy’ call on MAHB with an unchanged fair value of RM7.53 per share. —Bernama