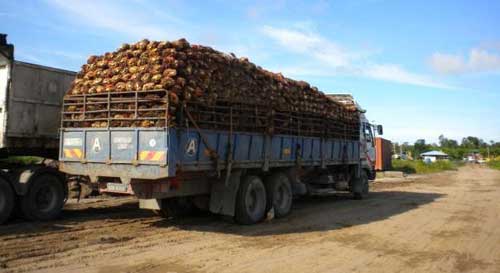 LION’S SHARE: Photo shows oil palm fruit bunches being loaded on a lorry at one of Ta Ann’s collections points. The group’s upstream palm oil business is now the largest profit contributor at 77 per cent of 2011 PBT.

KUCHING: Ta Ann Holdings Bhd (Ta Ann), traditionally a major timber player, has in recent years diversified and fortified its business model with its upstream palm oil business which is now the largest profit contributor at 77 per cent of 2011 profit before tax (PBT).

“Its plan to plant 3,000 hectares (ha) per annum would bolster its double-digit FFB growth phase which is expected to last till 2017,” the research house highlighted.

Maybank IB noted that Ta Ann had 30,911ha of planted land and about 12,000ha of plantable reserves in Sarawak as of December 2011.

Its land bank had grown at a CAGR of 28 per cent since 2005, and the group was well positioned to tap the vast one million ha of agricultural land reserves in Sarawak, Maybank IB reckoned.

“Armed with its strong balance sheet, Ta Ann can still increase leverage by MYR200 million before exceeding a net gearing ratio of 50 per cent,” the research house stated.

Meanwhile, despite the timber division’s relatively smaller earnings contribution (23 per cent of PBT in 2011), its plywood division which is highly exposed to Japan (with 90 per cent of plywood sales) could benefit from Japan’s reconstruction demand rising from the aftermath of the 2011 disasters.

Maybank IB opined that the potential divestment of its loss-making Tasmanian operations would be positive to timber earnings as well, while expecting Ta Ann’s net profit to grow at a 15 per cent three-year CAGR (2011 to 2014), mainly driven by its plantation growth.

Ta Ann’s long-term growth catalyst would emanate from its maturing forest plantation that would boost its logs supply significantly after 2015 and enhance its logs extraction yield.

“Tan Ann’s current valuation of 10 times 2013 price earnings ratio (PER) and enterprise value (EV) to planted hectarage of RM38,436 per ha is unjustified given its transformation from a cyclical timber play into a more defensive oil palm plantation player with quality earnings growth.

“Ta Ann is our top pick of the plantation sector for we believe this undervalued stock is due for a re-rating, buoyed by its improved earnings quality and strong growth,” Maybank IB concluded.

Based on the positive growth drivers, it remained bullish on the group and set a target price of RM9 per share (15 times 2013 PER), which implied an EV per planted ha of RM67,600 or circa eight per cent discount to industry average.