Monday, August 10
You are at:Home»News»Sarawak»Indonesia opens doors to M’sian businessmen 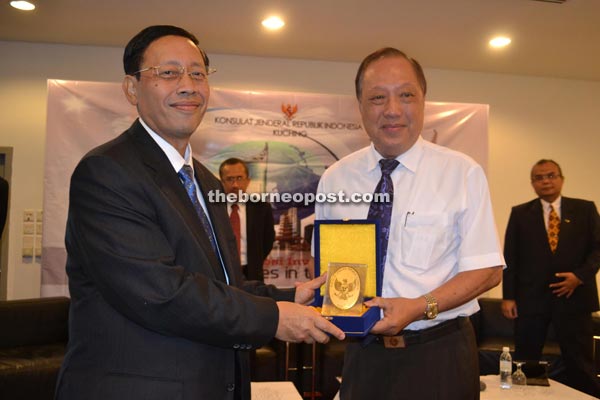 IN APPRECIATION: Djoko (left) hands over a memento to Hu at the Indonesia Investment Promotion Seminar at RH hotel.

SIBU: Malaysian businessmen are welcomed to participate in Indonesia’s business opportunities through the Master Plan for the Acceleration and Expansion of Indonesia’s Economic Development.

The invitation was made by Consul-General of the Republic of Indonesia, Djoko Harjanto at the Indonesian Investment Promotion Seminar “Identifying opportunities in the Indonesian market” held at RH hotel here yesterday.

He added that investors and businesses could choose their desired economic sectors and preferred regions according to their business interest and specialisation.

The theme of the seminar was identifying business opportunities in the Indonesian market created by the master plan which was unveiled by the president of the Republic of Indonesia, Susilo Bambang Yudoyono, in May last year.

Djoko pointed out that Indonesia had been politically stable since its reformation in 1988 although the nation’s democracy was still evolving.

“It’s through democracy that we could find political stability — something that the business community is seeking for,” he pointed out.

Touching on the present economic situation in Indonesia, Djoko said, “We know we have the largest middle-class in Southeast Asia — arguably, one of the fastest growing in the region. About half of our population live in the urban areas.”

The Indonesian consul also drew the attention of the participants to the fact that about half of Indonesia’s 240 million people were below 29 years old.

“Our youth is arguably the most connected ever — the second highest Facebook users, and the third highest Twitter users. There is also a new generation of dynamic Indonesian entrepreneurs who are keen to bring Indonesia to the world and the world to Indonesia.”

According to the master plan, he said eight main programmes and 22 main economic activities had been identified in addition to six economic corridors identified as growth centres which were expected to boost economic development throughout the nation.

Djoko stated that the implementation of the Master Plan could not be done solely by the Government but needed the active participation from private sector, either domestic or overseas, including Malaysia, the closest neighbour of Indonesia.

“In my opinion, the close relationship between Indonesia and Malaysia is an important foundation to foster economic cooperation between the two countries.”

Djoko added that the close ties between the two countries were reflected by the bilateral trade value that reached USD14.7 billion in 2010, and a foreign direct investment of Malaysia to Indonesia in the same year according to the Indonesia Investment Coordinating Board is USD 696.8 million.

Previous ArticleKarim believes Najib, Taib mean what they say
Next Article One month’s jail, RM1,000 fine for student who stole a sweater