Friday, July 10
You are at:Home»World»Chile clashes over Pinochet tribute documentary 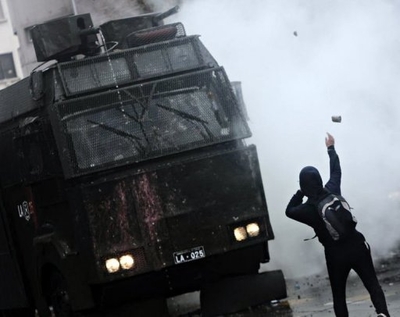 Anti-Pinochet demonstrators are dispersed by riot police with tear gas in front of the Caupolican Theatre in Santiago. More than 3,200 people were killed or disappeared during Pinochet's rule, and researchers have documented some 37,000 cases of torture and illegal detention.—AFP photo

SANTIAGO: Hundreds of protesters clashed violently with police in the Chilean capital as they demonstrated against the screening of a new documentary honoring the late dictator Augusto Pinochet.

“Murderer! Murderer!” chanted demonstrators at Teatro Caupolican in Santiago ahead of the screening of “Pinochet,” which celebrates the general’s 1973-1990 military dictatorship.

Some protesters wore masks to conceal their identity as they threw sticks and stones at police or set up improvised roadblocks.

More than 500 police in full riot gear responded by firing tear gas and water cannons to prevent their advance on the theater, where a few thousand Pinochet supporters were gathering for the tribute.

Officers charged on protesters. Most ran for cover but some were pinned to the ground and arrested. A few demonstrators attacked Pinochet sympathizers to try to prevent them from getting to the theater.

The clashes lasted about two hours. Sixty-four people were arrested, and 22 were injured — 20 police and two demonstrators, the Santiago authorities said.

The screening has triggered a firestorm of controversy, pitting Pinochet supporters claiming the right to free speech against relatives of regime victims who are furious that the event was allowed to proceed.

The government of Sebastian Pinera, Chile’s first right-wing president since Pinochet left office, has said it does not support the tribute but respected its right to take place.

More than 3,200 people were killed or disappeared during Pinochet’s rule, and researchers have documented some 37,000 cases of torture and illegal detention.

Pinochet died in 2006, aged 91. He was never sentenced for rights abuses during his regime.

“This event is an affront on human rights,” read one sign held by a protester, while others held up posters featuring the portraits of missing or killed relatives as they shouted angry slogans at people trying to get to the event.

Another sign read: “We cannot pay tribute to a murderer.”

Supporters of the general meanwhile brandished posters with Pinochet’s image and the word “thanks” beneath.

“The police are limiting our activity in order to allow activities in honor of the dictator. This is paying tribute to a criminal,” Mireya Garcia, vice-president of the Association of Relatives of Detained and Disappeared (AFDD), told CNN Chile.

Inside the theater, more than 2,000 supporters crowded a hall to pay tribute to the former dictator.

“This is a ceremony to honor history,” said the general’s grandson, Augusto Pinochet Molina, the only member of the family to attend the ceremony.

A judge threw out a bid by relatives of Pinochet’s victims to ban the event. More than 350 cases of disappearance, torture, illegal detention and conspiracy under the dictatorship remain open.

The Pinochet event caused one of the most violent demonstrations in recent years in Chile. Pinera’s tenure has been marked by a series of protests, in particular by students demanding education reform. –AFP