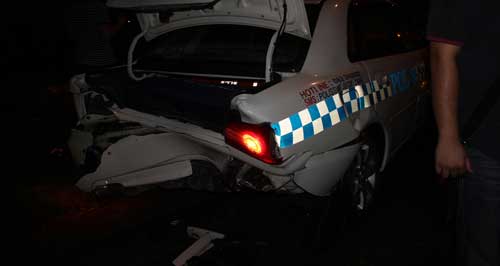 MIRI: Two policemen and a woman reporter sustained severe injuries after their cars were hit by an apparently drunk driver at Miri-Pujut road about 3am yesterday.

The two policemen were among three in a mobile unit vehicle who had stopped to assist victims of a minor accident involving a proton Wira and Kancil cars.

A crime desk reporter from a local Chinese daily was also there to take pictures and interview the victims.

While these were going on, a Satria Neo car suddenly appeared as if driven out of control and ramped into the police car and a Proton Wira parked by the roadside injuring two policemen and the reporter.

The other policeman who was still seated behind the wheel sustained only minor injuries.

The injured trio were rushed to a hospital. It turned out that the driver of the car which hit them was drunk. He was subsequently arrested and brought to the police central station here for investigation.

Several members of the public who happened to be at the accident scene including both drivers of two vehicles involved in an earlier accident managed to avoid being hit.