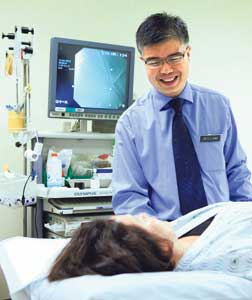 LIGHT MOMENT: Dr Chris Kong shares a light-hearted moment to put the patient at ease before the procedure.

For a patient, having an endoscope inserted down the throat or up the anus to peer into the small bowel isn’t very comfortable, especially if one has to remain half awake.

But such a procedure is necessary for doctors to have a clear view of the small intestine or nearby areas when diseases, like cancer, are suspected.

The conventional procedure to diagnose, repair or remove gastrointestinal abnormalities, which can sometimes be lifethreatening, can take several hours.

But a new medical technique – spiral enteroscopy – cuts the time taken for an endoscope to be guided through the body’s natural openings, so doctors can peer inside the digestive system, to under an hour, reducing the risks for a patient.

“The longer a patient is on the table, the greater the chance of a complication, so we try to keep our procedural time as short as possible,” said Dr Chris Kong San Choon, consultant, Department of Gastroenterology and Hepatology, Singapore General Hospital (SGH), who pioneered the spiral enteroscopy technique at SGH.

Dr Kong has performed 10 of these procedures to date.

His first patient was Ong Hua Kok, 72, who suffers from anaemia.

In early 2010, Mr Ong agreed to undergo the procedure in a bid to pin down the source of the anaemia.

Anaemia is often due to intestinal bleeding. Dr Kong had explained to his patient what he wanted to try, the risks and advantages.

He was urged to go for another investigation of his small intestine. 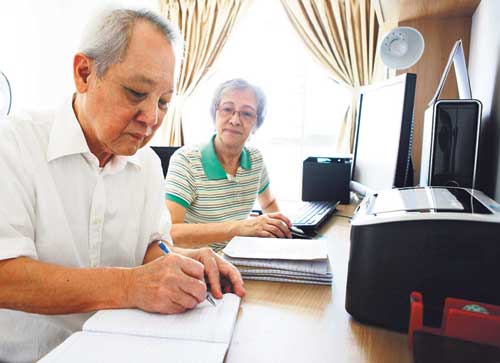 FIRST PATIENT: Mr Ong (foreground, with his wife) was the first patient to undergo spiral enteroscopy in Singapore.

In July 2011, he underwent his second spiral endoscopy.

This time, a 4cm cancerous tumour was detected.

A sample of the tissue was taken for examination and the site of the tumour marked.

When it was found to be malignant, he was immediately operated on. Dr Kong’s early investigation and marking of the tumour site provided a clear map for surgeons.

Both times, Mr Ong underwent spiral endoscopy as it was faster than the alternative, conventional balloon enteroscopy.

“I knew the risk but we had to move on.

There is a three per cent risk (of getting into an accident), but you assess the risks against the benefits and you cross the road,” he said.

The shorter procedure, said Dr Kong, is possible because of the spiral enteroscope’s design, which uses the concept of a screw in its over-sleeve design.

The doctor rotates the endoscope, or flexible telescope, into the small bowel or intestine for a snug fit, and keeps the device steady amid the constant movement of the bowel walls.

“We want a technique that is fast and reliable,” said Dr Kong.

“We don’t want to take out a polyp, then have the scope slip back and have to tell the patient, ‘Sorry, our scope slipped back so we couldn’t go back down again.’”

A slippage can happen during the conventional single and double balloon enteroscopy procedure. 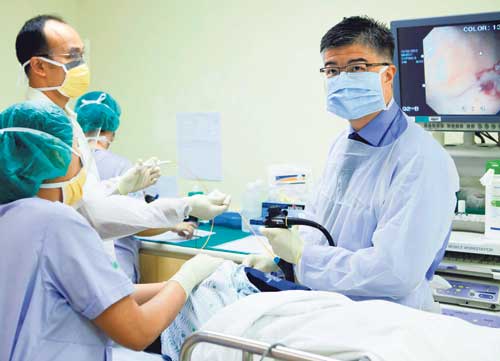 SPIRAL ENTEROSCOPY: A tiny, high-resolution video camera attached to the endoscope relays images to large monitors, helping Dr Kong see the inside of the small intestine in great detail.

Depending on whether a suspected bleeding or abnormal mass is near the beginning or end of the small intestine, the snakelike endoscope is guided through the patient’s mouth or anus to reach the affected site, which then allows the doctor to repair or remove the problem.

The length of the small bowel can be around 6m in all, making insertion of the endoscope all the way through difficult.

In the balloon method, the long tube moves through the organ and a balloon is inflated via an external pump to hold the endoscope in one place.

The balloon is deflated when the endoscope is pushed or pulled to a new location in the small bowel.

The balloon method can take two to three hours to perform and a key problem is that there is a chance that the endoscope will slip backwards or lose its place in the small bowel, particularly when the balloon deflates, because the bowel wall is always moving.

With spiral enteroscopy, there is no pump because the physician rotates the endoscope in the small bowel, the key being to catch the inner lining of the intestine with the threads of the screw.

The aim is to pleat the organ’s inner lining back, which allows the endoscope to inch forward. But it is also the screwing effect that holds the endoscope firmly in place – no slippage.

Outside studies have shown spiral enteroscopy to be a faster procedure than its balloon counterpart and relatively safe.

Last year, the Journal of Gastroenterology and Hepatology reported that, among an Asian subset of patients, the average depth of insertion of the spiral endoscope was 249cm past the ligament of Treitz – the section near the start of the small intestine that connects the organ to the diaphragm.

Procedural time less than an hour Dr Kong estimated the shortest procedural time he has encountered so far with using the spiral endoscope to be about 40 minutes.

Once the doctor locates the problem area, it may take another five minutes to prepare the minuscule tools needed to repair a bleeder or cut out a polyp.

With the balloon method, the flexible telescope might slip back from the right location during this waiting time as it is not firmly anchored to the small bowel walls, thus lengthening the time of the procedure and increasing the risk to the patient if the doctor has to reprobe the area.

Because it is relatively new at SGH, spiral enteroscopy is done under inpatient care. However, the patient is sedated and not put under anaesthesia during the procedure. Complications have been negligible.

Anatomy of the small bowel 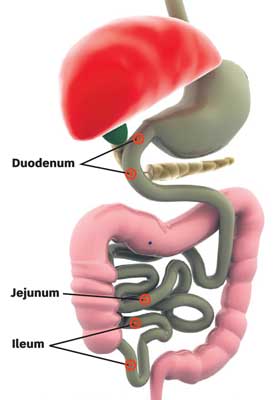 THE SMALL bowel’s main function is to absorb the nutrients in food.

Its inner wall is lined with millions of tiny finger-like projections called villi and microvilli, which greatly increase the surface area of the small intestine, allowing nutrients to be absorbed.

The small bowel is anatomically divided into three parts: Duodenum – This is the beginning and shortest section of the small bowel and is mostly involved in digestion.

It is also the opening to the pancreas where pancreatic juices enter the small bowel to aid in absorption.

In endoscopic procedures, this area is vulnerable to irritation of the pancreas, which can lead to pancreatitis.

Jejunum – This coiled section accounts for about 40 per cent of the length of the small bowel.

The circular folds of the organ can best be seen here. The folds increase the surface area inside the intestinal walls for enhanced absorption.

Ileum – This section accounts for about 60 per cent of the small bowel and runs from its midsection to the entrance of the large intestine.

It is a rare feat for a physician, even one who is very experienced and skilled, to manoeuvre any endoscope through the entire small bowel from one end.

This is why, depending on the location of a polyp or bleed, an endoscope will be inserted from the patient’s front end (the mouth) or his back (the anus).

• This story was first published in Singapore Health, May/Jun 2012.