Saturday, January 29
You are at:Home»News»Sarawak»Grassroots leaders shut their doors on Donald Lawan 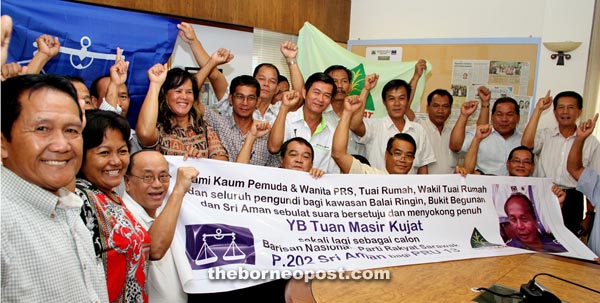 SOLID SUPPORT: The representatives from Sri Aman declaring their full support to incumbent Masir Kujat. — Photo by Chimon Upon

KUCHING: Entrepreneur Donald Lawan will find it very tough if he were to contest against Sri Aman incumbent MP Masir Kujat of Parti Rakyat Sarawak (PRS) in the coming general election.

Several grassroots leaders from the state seats of Balai Ringin, Bukit Begunan and Simanggang which are under the parliamentary constituency believe that Donald would be rejected outright by the people based on a number of factors.

“We heard that he (Donald) wants to contest as an independent in the coming election but there is no way the people will support him. This is because people still remember clearly what he said in his speeches when campaigning for his son (Balai Ringin assemblyman Snowdan Lawan) in the last state election.

“Throughout the campaign he had been telling people to support and vote for BN because only BN elected representatives could bring development to their kawasan (areas). So if he is going to say otherwise now, of course nobody will listen to him,” said the spokesmen for a group of some 30 Parti Rakyat Sarawak (PRS) grassroots leaders from the three state constituencies.

They were here to declare their full support to their party president Tan Sri Dr James Masing and his choice of Masir Kujat to be re-nominated to defend Sri Aman in the coming election.

“We, on behalf of the people of Sri Aman parliamentary constituency, pledge our full support to our MP YB Masir Kujat to be the BN candidate for the coming general election as recommended by our party president.

“We know the Sri Aman MP as a humble, friendly and hardworking person. He is also a person who walks the talk in line with the BN tagline of ‘Janji Ditepati’ (Promises Fulfilled),” they said.

They also claimed that Masir had a very good working relationship with the assemblymen in the three state constituencies under Sri Aman parliamentary constituency.

“Because of that we strongly believe that he will again deliver the Sri Aman seat to BN this time”.