Thursday, October 1
You are at:Home»News»Sarawak»Granny, 2 grandsons die in fire 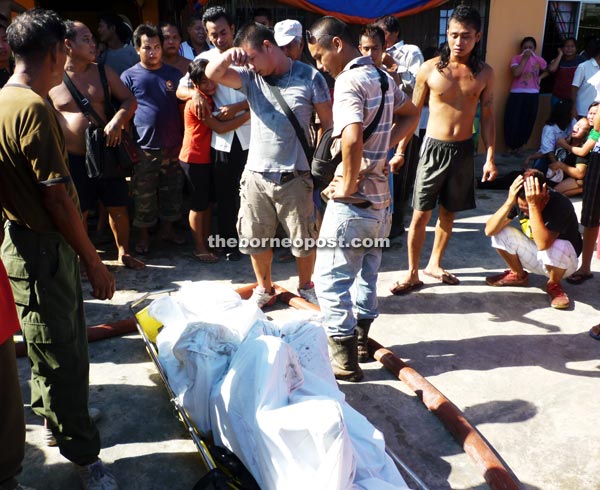 TRIPLE TRAGEDY: Cristiano’s father (with hands on hips) stands over the covered bodies of his son, his mother Uka and nephew Ronnie surrounded by distraught relatives and neighbours. 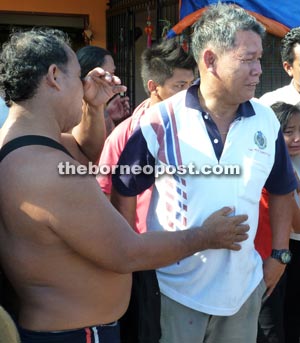 TRAGIC LOSS: Tahir (right) breaks down in tears as firemen recover the victims’ bodies from the house.

KOTA SAMARAHAN: A woman and her two young grandsons died when a fire gutted the wooden section of their house at Kampung Rembus here yesterday afternoon.

The tragedy occurred around 2pm shortly after Uka and her husband, Tahir Sabau, 57, had returned to their semi-concrete house after having spent the earlier part of the day in Kota Samarahan town together with Cristiano, Ronnie and an infant grandchild.

When met, Tahir said they had just returned home when he saw smoke billowing from the upper floor of his house, which was made of wood, but did not see any flame.

He said he was unloading some items from his car when Uka quickly handed over their infant grandchild for she wanted to check the source of the smoke.

“I told her to be quick…to take a quick look upstairs and then exit the house. I was not aware the two boys, who were cousins, had followed her upstairs,” said a distraught Tahir at the scene.

The trio was believed to have been overcome by the thick smoke and became trapped inside a
room on the upper floor.

Their charred remains were discovered by firemen after the fire had been extinguished, with Uka cradling Cristiano in her arms and Ronnie by her side.

A Samarahan Fire and Rescue Services Department spokesperson said the department reached the scene at 2.30pm after receiving a distress call at 2.18pm. 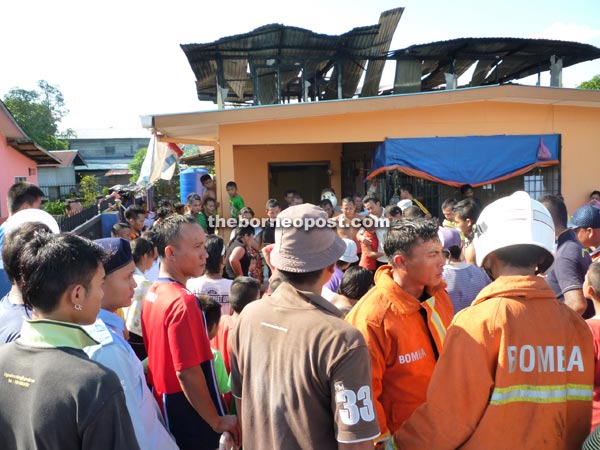 RAZED: A large crowd gather in front of Tahir’s gutted house after word of the three fatalities spread throughout Kampung Rembus.

The situation was brought under control within minutes and the fire was put out at 3pm.

District police chief DSP Abdul Rahman Ahmad, who was present at the scene, said initial investigation pointed to the fire starting from the kitchen before spreading to the wooden upper section.

The actual cause of the fire, however, is still under investigation.

Meanwhile, distraught family members and relatives, all of whom were either away at work or visiting the homes of other relatives, rushed back after learning of the tragic news and broke down at the sight of the three bodies.

It was learned that Cristiano’s younger sister was at her maternal grandparents’ house at the time of the fire, while Ronnie’s elder sister and younger brother had followed their mother on a trip to her village in Serian.