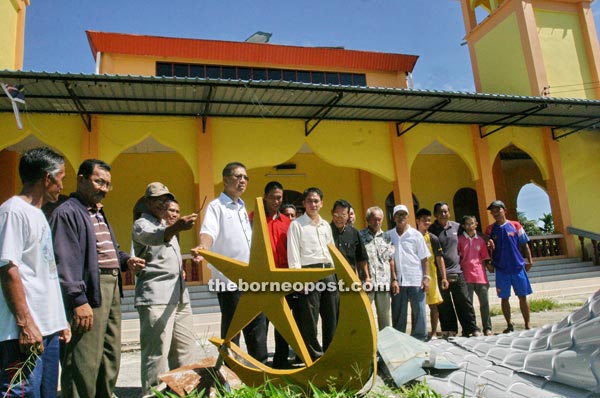 SEBUYAU: Sebangan’s Darul Aman Mosque, which lost part of its roof due to strong wind on Tuesday, will receive immediate repairs.

Assistant Minister of Rural Development Minister Julaihi Narawi gave the assurance yesterday when he visited the mosque at Kampung Sampat, Sebangan to assess the damage.

Besides the roof, the mosque’s dome was also sent crashing to the ground.

“I am seeking an emergency fund from the State Development Office (SDO) and I have spoken to the director.

“I see this as urgent and I hope that the repair work can be done in two or three days,” said Julaihi, who is Sebuyau assemblyman.

Julaihi said as a result of the damaged roof, the mosque’s interior and carpet also suffered water damage.

Officers from the Welfare Department were also present yesterday.

“The Welfare Department will go to the affected houses to assess the damage to enable assistance to be rendered,” said Julaihi.