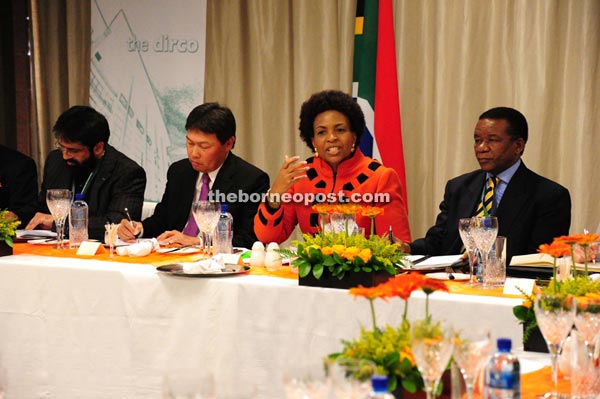 ENHANCING ECONOMIC TIES: (From left) Anil Sooklal (deputy director-general of the Asia and Middle East Directorate), Kennedy and Mashabane during the luncheon meeting for Heads of Mission from Asian countries.

SIBU: Maite Nkoana Mashabane, the Minister of International Relations and Cooperation of South Africa, hosted a luncheon meeting for heads of mission from Asian countries including Australia, New Zealand, Fiji and Timor-Leste at the Department of International Relations and Cooperation (DIRCO), Pretoria, South Africa, recently.

The heads of missions were headed by Kennedy Jawan, High Commissioner of Malaysia to South Africa in his capacity as dean of the Asian regional group.

In her remarks made available in a press statement issued here, Mashabane spoke on the importance of South Africa’s trade and investment with Asian countries, noting that trade with Asian countries last year amounting to R577 billion (RM225 billion) was the highest as compared to other regions including that with the EU.

She said this made Asia the largest trading partner of South Africa, and looked forward to enhance further economic and trade ties with countries in the Asian region.

She also briefed the Asian Heads of Mission on South Africa’s foreign policy which placed emphasis on the African continent.

Emphasising the importance of South Africa’s bid for the African Union Commission chairmanship as a crucial step to address the issues of importance to the continent, she also briefed on South Africa’s remaining tenure as a non permanent member in the United Nation Security Council (UNSC).

Kennedy Jawan in his response thanked the minister for hosting the meeting and commended it as timely, and that it provided opportunities for Heads of Mission to hear South African policies directly from the policy makers.

He also stated that it was crucial to have a clear understanding of South Africa’s domestic and foreign policies as this would help missions to paint an accurate picture when they reported to their respective capitals. He also hoped that such interaction between DIRCO and the Asian Heads of Mission would be held frequently.