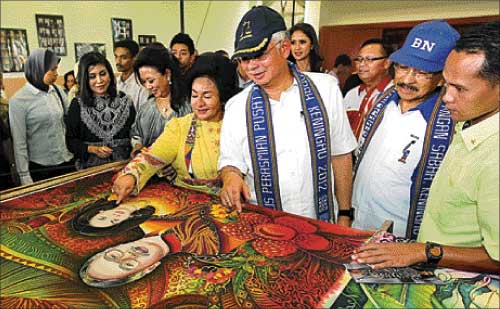 LOOKS LIKE ME: Najib and Rosmah admiring the batik work of them at the newly launched Sabah Handicrafts Centre in Keningau.

“I came all the way from Kampung Gaya Ratau in Tamparuli to see this building. It is huge and I believe it would benefit the people well,” said the 45-year-old mother of two children.

Rosiah said she would not mind sending her children to undergo the handicraft making courses as she believed it had great potential and would help to increase their income.

As for mission number two, Rosiah said: “I am all excited to see our nation’s premier leader since I have only seen him on television and never met him personally. So being here is such a great opportunity,” she said.

Najib, who was accompanied by his wife Datin Seri Rosmah Mansor, is on a two-day visit here. Also present were Chief Minister Datuk Seri Musa Aman and other cabinet ministers.

Meanwhile, best friends Mohd Amin Muhidin and Yuslan Jafri, both 37, were proud when Najib and Rosmah admired their batik works.

“It took us four sleepless nights to finish the batik. We decided to draw the nation’s premier leader and our first lady and added the Sabah concept into the creation,” said Mohd Amin.

Asked on the most challenging part of the project, both pointed at the faces of the two national figures.

“We wanted to make sure that it is perfect,” he said.

Another trainee at the centre, Claire Maidin, said she never regretted signing up for the Hydrostone Course.

“It is a three months course and I have only been here for about two weeks. This is an interesting opportunity for me to learn some skills,” said the 19-year-old lass from Kampung Toboh Baru, here.

As for the senior ones Mursdah Muang, 53, Solumi Mijaa, 39, and Maruajib Ahmad, 54, it is a great opportunity to have a place to showcase their works.

“Besides, I get to improve my existing skills,” said Nursdah from Kuala Penyu, who has been making mats for the past two years.

Solumi, from Kudat, who does the Dastar Rungus, said she has been doing it since she was 16, but explained that it was a great opportunity for her to upgrade her skills.

Muruajib, on the other hand, has his own workshop to build miniature lepa-lepa, a reflection of his hometown Semporna.

“I have been doing miniature lepa-lepa since 1980. I usually use the tambuh-tambuh wood for my products and having to showcase and sell my work at the Centre is a great opportunity to increase my income,” he said.

This centre will provide a one-stop centre for training and marketing of handicraft products as well as to develop and nurture entrepreneurship skills among the locals thereby enhancing their quality of life. The RM30 million building consists of a two-storey building where the ground floor is dedicated to exhibition and retail of handicraft products.

Other facilities at the ground floor are workshops for machineries, a multi-purpose hall and a cafeteria.

More rooms are being allocated for handicraft training purposes on the first floor to train local people and handicraft enthusiast with the latest handicraft skills.

Previous ArticleChoose leaders who are evaluated on their history and track record, advises Najib
Next Article RM235 mln loan for water treatment in Keningau