Tuesday, May 18
You are at:Home»News»Sarawak»All Muslims have responsibility to spread Islam 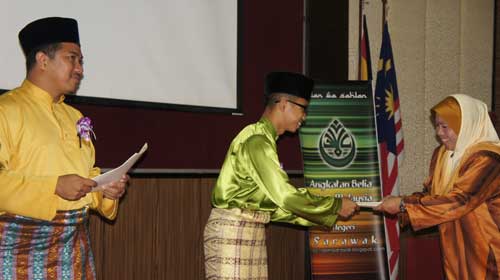 SUCCESSFUL: Khairul Anwar (centre) presents a certificate of participation to a participant of the seminar.

KUCHING: Every Muslim has a part to play in ensuring that messages and teachings of Islam are disseminated to those interested to learn and embrace the religion. 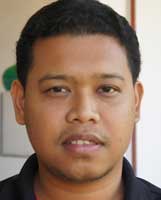 This was the general opinion of participants of the ‘Dakwah Volunteers Seminar’ organised in conjunction with the 33rd annual general meeting of the state’s Angkatan Belia Islam Malaysia (Abim) at Sarawak Training Centre, Telaga Air yesterday.

According to a participant, Zaifurhazriq Abdullah, 29, each Muslim is entrusted with the duty to spread his or her religion to those not clear with the messages and the teachings of Islam.

“This is why this seminar is a good platform to churn out volunteers as I believe the objective can be realised by training capable personnel, especially youths,” said Zaifurhazriq who is a teacher at the GiatMara centre here.

Considering the negative influences of globalisation, he said it was the right time to recruit volunteers who could make change and ensure that the Muslim society would not be affected by such influences.

Meanwhile, another participant, Sofia Japar, 19, said the seminar had helped to shed some light and help build her confidence to become a volunteer.

“We learned a lot of methods and the right approach as a volunteer. The seminar also had shaped us in terms of self-confidence and had given us more knowledge on the religion,” said the student of a local college.

She suggested that the programme be held frequently as there were many young Muslims out there interested to be part of the volunteer movement. 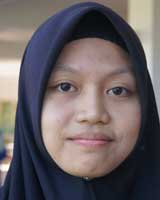 Yayasan Dakwah Islamiah (Yadim) assistant director Khairul Anwar Sazali, who represented Science, Technology and Innovation Deputy Minister Datuk Fadillah Yusuf, in his speech said Muslims should not leave the role of spreading the teachings of the religion to religious teachers.

“Everyone has their role and responsibility towards the religion and this is what the seminar tries to instil among participants,” he said.

He proposed that more smart partnerships among religious bodies and organisations should be formed to ensure bigger
impact and achieve the objectives.

He also announced a grant of RM3,000 from Fadillah to Abim for its religious programmes.