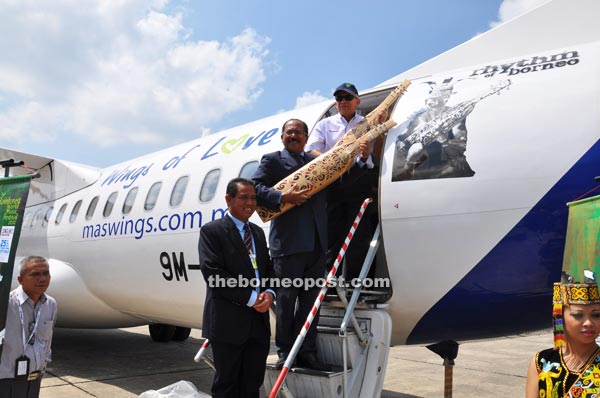 In a joint promotion by Sarawak Tourism Board (STB), MASwings and Malaysia Airports Berhad (MAB), the move is seen as a shared interest to promote Sarawak and boost the tourism industry.

“We want to encourage more visitors to Sarawak, especially during iconic events such as the RWMF,” said STB chief executive officer Datuk Rashid Khan during the unveiling of the RWMF logo on one of the two aircrafts yesterday.

He also said ticket sales for this year’s 15th edition of the RWMF on July 13 – 15 at the Sarawak Cultural Village had doubled compared to last year.

Taking safety and security aspects seriously, Rashid assured that crowd control would be given top priority to ensure that the number of revellers allowed into Sarawak Cultural Village does not exceed its maximum capacity.

Besides the World Craft Bazaar, he said other fringe events for the RWMF would include a talent search for participants from the South East Asian region.

“The winner of the contest will bag RM3,000 and have a chance to perform during the evening concert,” he added.

Rashid also said STB was planning to hold a Rainforest World Music Expo next year as a platform to showcase and sell their music to festival organisers.

On their extended collaboration with MASwings, Rashid said a lucky draw would be held for their Pontianak-Kuching-Bandar Sri Begawan sector.

“There will be 100 lucky draw prizes made available for customers who fly on MASwings flight during the period of June 18 to July 7,” he said.

The prizes, said Rashid, would be tickets for a trip to Sarawak to attend upcoming events.

As a prelude to RWMF, Rashid revealed that a special ticket event would be held on July 12 for diners and non-diners to meet and greet the RWMF performers.

The tickets, according to him, would be sold at RM80 for diners and RM30 for non-diners.

Meanwhile, MASwings chief executive officer Capt Datuk Nawawi Awang was confident that with the promotion more people would be flying within the BIMP-EAGA region.

“People outside heard about the RWMF, but they have no access via direct flights to Kuching. With this promotion it will open up the doors for them to be part and parcel of the music festival,” he said.

Nawawi also said the promotion was not a one-off collaboration between MASwings and STB as they had also collaborated to promote Sarawak in Taiwan and also jointly hosted the BIMP-EAGA golf competition in Miri recently.