Sunday, February 23
You are at:Home»News»Sarawak»Bright future for tourism sector 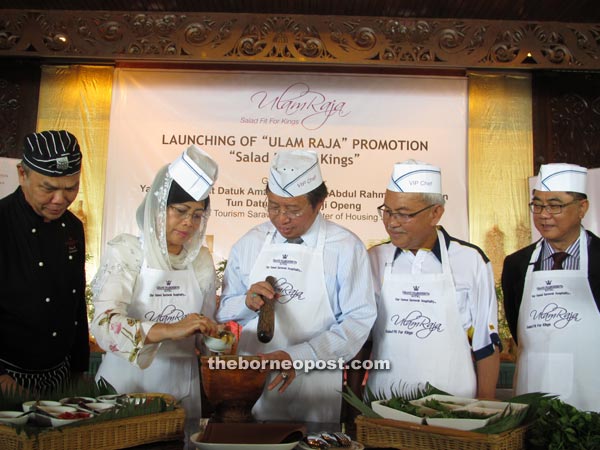 LET’S MAKE SOME ULAM: Abang Johari (centre) is assisted by Fatimah (second left) when demonstrating how to make the ‘Ulam Raja’ while Talib (second right) and others look on.

This was revealed by Minister of Tourism Datuk Amar Abang Johari Tun Openg, who pointed out that the first quarter of this year also saw an increase of 16 per cent in visitor arrivals to the state.

“This positive growth signifies that the state’s tourism sector has a bright future and I hope that by year end, we will achieve our target of four million visitor arrivals in Sarawak,” he said when launching the promotion for menu ‘Ulam Raja — Salad Fit for Kings’ at Grand Margherita Hotel here yesterday.

He also disclosed that the Tourism Ministry will be seeking new can-do approaches to market the state through the latest technology and the international
media.

“We will position ourselves in international television channels such as CNN, Discovery Channel and AXN and feature Sarawak as a state that conserves its rich biodiversity.

“With the International Tropical Timber Organisation’s (ITTO) recognition of Sarawak as a role model for conservation earlier this year, this would be our approach to share with the rest of the world,” Johari said, adding that the state’s national parks will be featured in the Tourism Ministry’s promotional programme.