Tuesday, August 9
You are at:Home»Business»Positive impact for SMEs with special incentive package 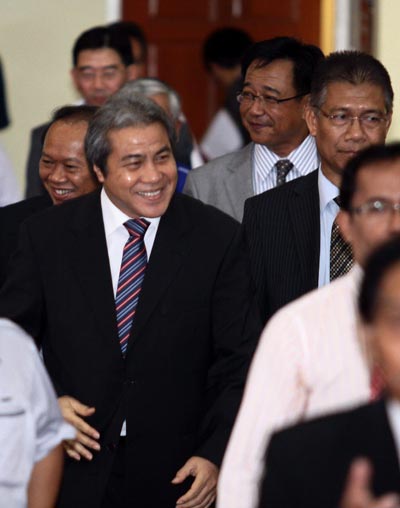 SPECIAL INCENTIVE: Awang Tengah arriving at Dewan Suarah, Kota Samarahan. He calls on young entrepreneurs especially to be more creative and innovative, and use technology to be more successful and competitive.

The special incentive is for companies approved by the state Industrial Coordination Committee (ICC) or with supporting documents from the Sarawak Ministry of Industrial Development.

In conjunction with the MOU signing, the Ministry of Industrial Development Sarawak also organised a programme called ‘Program Meneroka Peluang Dalam Sektor Perdangangan dan Perindustrian’ all over Sarawak, as well as the officiating of SME Week 2012.

Dato Hafsah Hashim, the chief executive officer of SME Corp Malaysia (SME Corp) in her speech said that the SME represented 99.2 per cent of all business entities in Malaysia.

“SMEs are the catalysts for the country’s development. There are 548,267 SME’s in Malaysia, of which six per cent or 33,000 SMEs are in Sarawak.

“Out of the 33,000 SMEs, 77 per cent are categorised as micro enterprise, which translates as a company with less than five people. An estimated 20 per cent of the SME are small enterprises, and the rest are medium sized enterprises,” elaborated Hafsah.

Regarding the event, she said that the SME Week was planned and held simultaneously in Malaysia to create awareness among consumers in Malaysia. It was also a platform to highlight the products and services by local entrepreneurs.

In her concluding speech, she said that this year was a pinnacle year for SME Week. As of this year, the SME Week would be held every year on the fourth week of June.

Meanwhile, according to Datuk Amar Awang Tengah Ali Hasan, “I believe, with this MOU, it will add value for ICC permit or supporting documents towards the entrepreneurs.

“This step is also meant to harmonise their current operations, as well as to encourage entrepreneurs to open their operations in a planned area by the government.” he added.

Awang Tengah also hoped that, with the programmes in place, the impact from the programmes could bring about significant benefits, as well as open the minds of entrepreneurs operating SMEs.

He called on young entrepreneurs especially to be more creative and innovative, and use technology to be more successful and competitive.

“The synergy is hoped to provide positive impact towards entrepreneurs’ development in the state. With this MOU, I hope that we can increase the efficiency of all the trade and industrial sectors, as well as to increase competition in domestic and international arena,” said Awang Tengah.

According to the Malaysian Investment Development Authority (Mida), with the Sarawak Corridor of Renewable Energy (SCORE), Sarawak had an investment of RM8.17 billion in 2011, surpassing Penang with RM4.48 billion and Selangor with RM4.38 billion.

“Since its initiation in 2008, SCORE has attracted more than RM24 billion in investments from 17 projects that would provide 14,000 job opportunities. The companies in SCORE that operate in the upstream industry will have potential businesses in the downstream industry, thus will give local entrepreneurs the chance to explore business opportunities,” concluded Awang Tengah.