Monday, February 6
You are at:Home»News»Nation»Bringing the world’s attention to Malaysia’s heritage
For the freshest news, join The Borneo Post's Telegram Channel and The Borneo Post on Newswav. 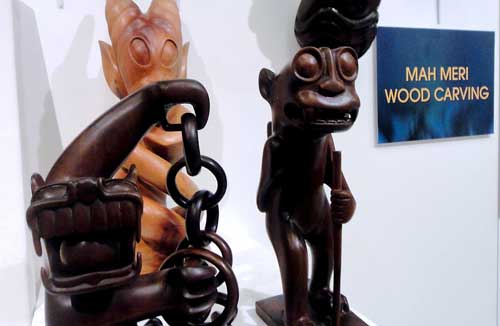 KUALA LUMPUR: In its efforts to bring global attention to Malaysia’s heritage, the National Heritage Department (JWN) has established a division that will conduct research and document the country’s intangible cultural heritage.

This intangible heritage will be demonstrated with traditional cultural shows, visual arts exhibitions and the art of expression (phrasal arts).

“This department intensifies efforts to promote our intangible heritage to ensure it does not disappear with the modernised mainstream,” she says, adding that society should be exposed to heritage events such as Jawi scripts and traditional music and dances.

According to Siti Zuraina, the Committee on Intangible Heritage has recommended that demonstrations of language customs and literature, culture and craft, food, traditional games and martial arts as well as the performing arts should be categorised as intangible assets.

This is in accordance with the National Heritage Act 2005.

Siti Zuraina says some of Malaysia’s intangible heritage is unique and able to attract global attention since it demonstrates the people’s way of life.

“In the Malaysian context, we have a plural society where each of the ethnic groups has its own religious beliefs and culture,” she states, adding that the JWN will continue to pursue efforts to promote the country’s intangible heritage.

Jawi script activist Professor Dr Hashim Musa believes it is time to bring the world’s attention to examples of Malaysia’s intangible heritage such as the Jawi script.

The lecturer at the Universiti Putra Malaysia’s Modern Language and Communication says despite efforts by government agencies to raise interest in the Jawi script, the response has been seasonal and limited.

He notes that the Information, Communication and Culture Ministry and the Education Ministry have been instrumental in bringing more attention to the Jawi script, particularly for daily usage.

Historically, the first Jawi script in the country dates back to 1303 when the “Batu Bersurat” (stone tablet) was found in Terengganu, followed by the Jawi-scripted letter from Sultan Ternate to the king of Portugal in 1522, while the oldest Malay Jawi-scripted book is the “Aq`id al-Nasaf,” dated 1590.

Meanwhile, the ‘Tok Dalang’ of the Seri Campuran shadow play troupe from Kelantan welcomes the government’s efforts to promote the ‘Wayang Kulit’ to the rest of the world.

(Tok Dalang is the master puppeteer and storyteller responsible for breathing life into the array characters in the shadow play).

Eyo Hok Seng, who is the Tok Dalang or leader of the five-man troupe (aged between 25 and 75), says he is honoured because the troupe has been invited by the government to perform at several shows abroad.

He notes the Wayang Kulit has been a popular cultural show since the olden days and should be preserved for the benefit of the modern generation.

The 57-year-old Eyo acknowledges that he has been involved in Wayang Kulit for 34 years and has made the best use of the paraphernalia needed for the performances himself. He has performed at the Unesco headquarters in Paris as well as in Thailand and Singapore.

Orang Asli Mah Meri carver Kemi bin Khamis is proud of his Orang Asli culture and believes the government’s move to hold Malaysia’s heritage expositions in foreign countries is brilliant since this move could attract foreign tourists to the country.

“I never expected the Mah Meri carvings to be brought to and put on display in Paris. I was elated to be able to exhibit the culture of my community at the Unesco exhibition,” states Kemi from Kampung Bumbum, Pulau Carey in Selangor.

Azizah Adam, the 52-year-old master of ‘seni tekat’ from Kuala Kangsar, Perak, is honoured to be one of the embroidery masters frequently invited by government agencies to showcase her skills abroad.

(Embroidery is the art or handicraft of decorating fabric or other materials with a needle and thread or with yarn. Embroidery may also incorporate other materials such as metal strips, pearls, beads, quills, and sequins).

Azizah, who is the recipient of the Craft Entrepreneur Award for 2010, says she teaches the art to young women at a workshop in Kampung Padang Changkat, Bukit Chandan in Kuala Kangsar.

The workshop has 12 workers.

“This field has brought me to many countries,” she adds. — Bernama