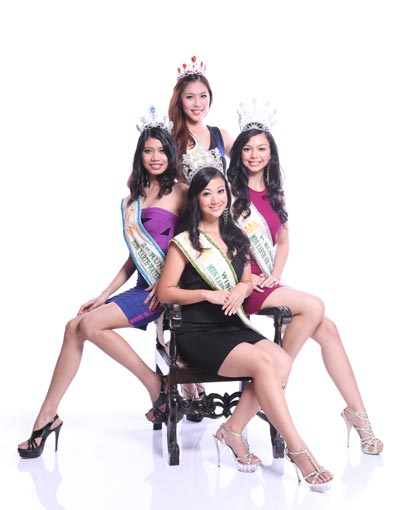 KOTA KINABALU: The top four winners of the recently held Miss Earth Sabah 2012, flew to Ipoh, Perak yesterday for the national-level Miss Malaysia Earth pageant to be held from today until July15.

Public relations and marketing manager of MNE Productions Sdn Bhd Clarvie M Charles Spawa said throughout the competition the participants would enroll themselves in programmes that would emphasize strongly on environmental protection and at the same time they would be given the opportunity to practise and voice out their green thoughts and ideas.

“During the pageant week, all contestants will go on a charity ride, visit old folks’ home, attend cultural talks and go on an educational tour to Cameron Highlands. There will also be talent and eco-couture competitions where all contestants will showcase their talent in performing and their unique handmade dresses made from recycled materials.

“Our state representatives, namely Joanna Marie Faurillo (20) , Deidre Ann Walker (18), Grace Chang (19) and Xandria Ban (18) will compete for the main title, Miss Malaysia Earth 2012, with all the other contestants from all over Malaysia.

When contacted yesterday, Xandria Ban, the soft spoken 18-year old who was third runner-up at the state-level competition said she was really excited to go for the national-level competition.

Although one of the youngest contestants, she will try her best and do all preparations needed, such as getting into good physical shape and reading more environmental issues from the Internet and newspapers.

Grace Chang, the second runner-up, can feel the bigger responsibility she has to carry and that makes her strive to be a better role model. Grace prepares herself by doing more catwalk practices and performances for the talent show competition.

Public speaking is an important element in a pageant of this kind, so Deidre Walker, the English-Dusun lass, who was also the first runner-up, has sharpened her public speaking skills by joining Kota Kinabalu Toast Master Club in the hope that she can be a better public speaker.

Joanna Marie Faurillo, the winner of Miss Earth Sabah is still overwhelmed by winning. Winning the title is like discovering a new person in herself.

She is excited and looks forward to representing the state at the national-level pageant. She prepares herself physically and mentally by doing a lot of exercises and does more in-depth research about the environment.

When asked whether they were confident to win major titles at the national-level pageant or to bring back the Miss Malaysia Earth crown, all the girls agreed they were confident to win major titles and bring back the crown because all the great experiences and knowledge gained from the eco-educational activities, practices, and environmental talks prepared throughout the Miss Earth Sabah 2012 pageant week, together with the post-event preparations have equipped themselves physically and mentally.

They are thrilled to do their best and make Sabah proud.

Meanwhile, Miss Malaysia Earth 2009, Mandy Nandu, who is also a director of MNE Productions and the organizing chairperson of Miss Earth Sabah, said: “ I have high hopes and confidence that the state representatives will win the major titles this year and bring back the Miss Malaysia Earth 2012 title.

“We have done all we can to equip them for the national-level pageant. They have big potentials and as long as they keep themselves composed in all the activities and rounds during the grand coronation night, I know they can win,” she said.

She added that Sabah won the Miss Malaysia Earth title at the national-level pageant for two consecutive years in 2009 and 2010.

Mandy Nandu won the main title at national-level in 2009, and represented Malaysia to the Miss Earth International pageant in the Philippines.

The victory was repeated the following year by Appey Rowena Januin, who represented Malaysia in Vietnam.

“Last year we almost repeated the victory for the third time where our representative won the first runner-up title at the national-level.

“It has always been the dream of the state organizer of Miss Earth Sabah to see more Sabahan girls achieving high accomplishments, not only at national-level but also at international-level, and introduce Sabah to the rest of the world.

“Not only that, it is hoped that all contestants will continue to play their roles in helping to raise awareness to the whole community in Sabah on the importance of keeping our environment clean and green,” said Nandu.

Miss Earth is the third-largest annual international beauty pageant after Miss Universe and Miss World, and its main purpose is to promote environmental awareness.

Every year, 80 to 90 candidates from all over the world compete on beauty and knowledge on world environmental issues. The international Miss Earth pageant this year will be held on October 28, in Bali, Indonesia.

The pageant celebrates its 12th year celebration whereby its advocacy becomes more and more significant and relevant. Miss Earth 2011, Olga Alava from Ecuador, will crown her successor at the end of the event. The candidates and winners give meaning and relevance to this beauty competition by promoting worthwhile environmental causes and getting actively involved in caring for the preservation of Mother Earth.

Apart from representing the state at the national-level Miss Earth Malaysia pageant, the reigning titleholders dedicate their year to promote environmental projects and to address issues concerning the environment.

They will be endorsed as ambassadors to the environmental protection campaigns and other green-initiated programs.