Wednesday, July 8
You are at:Home»News»Sabah»Woman escapes injury in three-vehicle crash 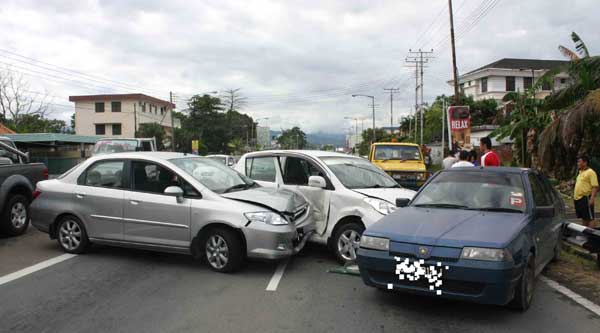 The accident scene at Penampang Road.

KOTA KINABALU: An elderly woman escaped injury after the Honda car she was driving rammed into a Perodua Myvi along the Penampang Road, near the Kota Kinabalu High School traffic lights junction at Lido yesterday.

It is believed that the woman was exiting from her house and was making a turn into the main road heading towards the city centre when she lost control of her vehicle and rammed into the side of Perodua Myvi around 9am.

The resultant impact caused the Myvi to hit into a Proton Saga car next to it.

The lady driver of the Myvi, in her 20s, sustained minor injury while the Proton Saga car driver and his son escaped unhurt.

The incident caused a snarl until police personnel were at the scene to control the situation.