Saturday, December 3
You are at:Home»Features»Bat hawks

TWIRLING, swirling, whirling and dancing best describe the 100,000 or so bats leaving the Deer Cave in Mulu at twilight. One of nature’s most spectacular displays, these mammals fly in a smoke formation across the sky trying to confuse and evade the bat hawk, which is ready to pounce on an unfortunate for an evening meal. 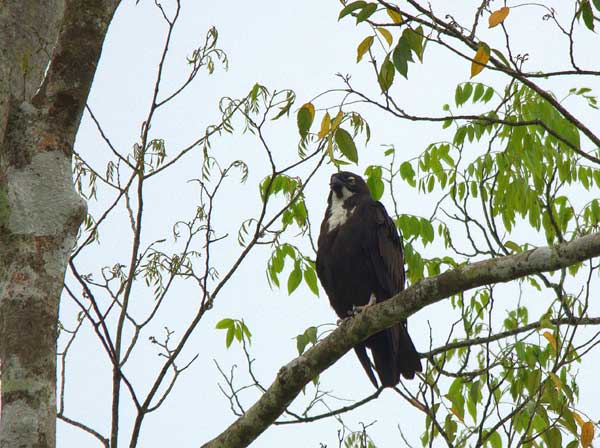 VANTAGE POINT: A bat hawk waits for dusk to begin the hunt. — Photo by Anthony Wong

Well-adapted for the hunt, the carnivore has fluffy owl-like feathers for silent flying. The eyes are large, larger than all other hawks for twilight and dawn hunting. They have even been observed flying on moonlit nights, searching for bats.

Swiftlets are their other prey. A bane to bird’s nest farmers, these hawks also hunt the denizens of expensive well-constructed houses where research has determined a profitable location.

Uniquely, bat hawks only pursue during the times these animals gather in large numbers when leaving their roosts – bats at dusk, swiftlets at dawn. Sometimes, there is only an 18-minute window to capture their prey.

Most raptors have feet which they use to seize prey. Their beaks have been adapted to tear and cut flesh while perched. Probably because of their short hunting time, bat hawks are the only raptor that generally captures, swallows and digests their meal whole on the fly. Other raptors occasionally do also use this hunting technique.

They are very efficient hunters. Observations in Zambia, part of their tropical old world range, counted a kill and consumption rate of seven insect hunting bats during an 18.3-minute time frame over seven consecutive days. The males of this raptor species are generally approximately the same size as the females.

Examination of the pellets in Zimbabwe indicates bat hawks only take smaller prey. They seem to avoid animals greater than 30 grams. A hypothesis proposed by Landon Jones is that their digestive system is likely larger than most other hawks because it is thought they must ingest and digest rather quickly during their 30-minute hunting span.

But, how does the mouth differ from other raptors? A graduate student and his colleagues predicted the mouth of the bat hawk evolved to feed rapidly on small agile vertebrates and would be larger than most other raptors. They also forecast it would closely resemble the gape size of swifts, swallows and goatsuckers that capture, eat and digest insects while flying.

The researchers measured the gape opening size of 138 male species from six orders found in museums and university collections. They also randomly selected swifts, goatsuckers and swallows. Then they did a lot of math.

The results showed the beaks were a major departure from other hawks and most closely resembled the insect feeders as predicted. The bat hawk diverged and then evolved into a separate species to exploit their unique ecological niche. Interestingly, there are no bat hawks in the Americas although there is a bat falcon but it does not swallow prey whole.

Whereas the bat hawk branched off from the hawk line, the goatsuckers and swifts arose from a common ancestor. The swallows evolved the trait similar to bat hawks but became many different species, while among the hawks there is just one.

The bat hawk, a unique individual, exploits mammals and birds that emerge only in a small time frame. They evolved a mouth and digestive system that allows them to swallow many individuals during a roughly 30-minute period. During evolution, these characteristics deviated from an established line where other birds branched off from a common ancestor. The bats also evolved a defence from these predators but that is another exciting and incredible article.

Adapted from and with permission: ‘Evidence of Convergent Evolution in Gape Morphology of the Bat Hawk (Macheiramphus alcinus) with Swifts, Swallows and Goatsuckers’ by Landon Jones et al in Biotropica 44(3):386-393, May 2012.